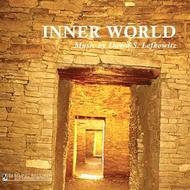 From Deep Dreams, for cello and piano based on Sephardic melodies from 15th Century Spain, to Building Blocks of the Psyche, a ballet score written for Beijing National Dance Theater, to the haunting wedding gift E Duo Unum and Inner Voices written for silky violas, to the highly virtuosic At Onement for solo clarinet, to Miniature VIII, a mournful duet for violin and viola also known to Yarlung fans in the solo rendition by Finnish violinist Petteri Iivonen, composer David S Lefkowitz takes us on an inner journey. The album concludes with the exhilarating duet for marimba and alto flute titled Within/Without.

'Inner World' features several Yarlung stars - hailed as an "Impeccable cellist" by Montreal's La Presse, and "A superb cellist" by the Syracuse Post Standard, Elinor Frey is an active recitalist and chamber musician; David Fung, piano, was described as stylish and articulate in the New York Times and praised as having undoubted talent by the Los Angeles Times.