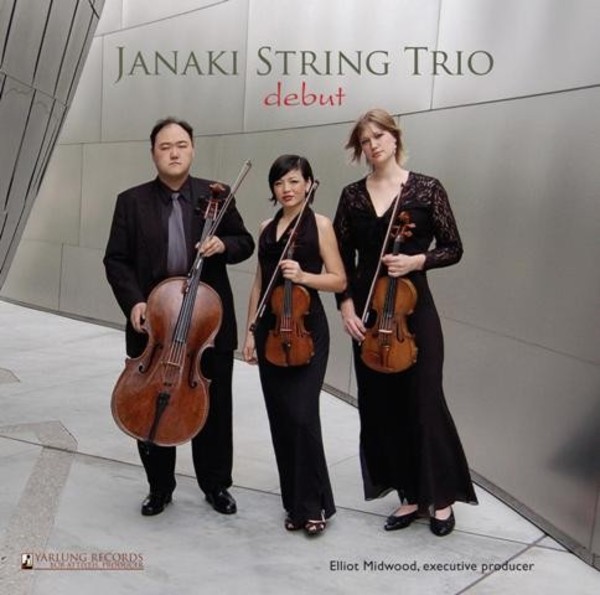 The three members of the Janaki Trio - violinist Serena McKinney, violist Katie Kadarauch and cellist Arnold Choi - found common cause while students at the Colburn Music School in Los Angeles, and the quality of their performances there first won recognition in the 2005 International Coleman Foundation Award. Only a year later the Trio had moved skyward, with New Yorks much-coveted Concert Artists Guild Award. Now, as an inevitable and delightful consequence, they are ready with the first recorded evidence of their high skills - and also, in the breadth of this program, of their awareness of the broad scope of the musical world they are now out to conquer.

The short, two-movement String Trio of Krzysztof Penderecki dates from 1991 - later, therefore, than the time of his violent, dramatic heaven-stormers like his opera 'The Devils' and the big choral works. Here is Penderecki in a conversational, almost neo-romantic mood. His instruments chat each other up during the agreeable slow movement, and then do so again at a busier pace in the second movement. This charmer of a movement begins as a fugue and gallops congenially toward its end.

After earning his Bachelors degree in Latin American Studies at Occidental College, Los Angeles-based composer Jason Barabba studied music at the University of Chicago, the University of California, Irvine and the University of California, Los Angeles. His teachers include John Eaton, Andrew Imbrie, Christopher Dobrian and David Lefkowitz. His 'DNR for Large Orchestra' was recorded by the Kiev Philharmonic for ERM Medias 'Masterworks of the New Era' recording project. His Trio is in four movements. Bela Bartók looks in now and then, especially in the haunting third-movement nocturne and for some rhythmic hijinks in the finale.

"Janaki's debut album was one of the first I mastered for Yarlung Records. People still want to talk about it at audiophile shows, usually with sharpie pen in hand, asking for my autograph on the original CD. This has become one of Yarlung's iconic recordings, an 'out of the ballpark' home run because it combines lifelike sound with hair raising, inspired performances. The 3D presentation, the 'you are there' tonality and perfect acoustic decay in Zipper Hall where this was recorded, reveal three living breathing musicians playing just for us; it doesn't get any better than this." - Steve Hoffman

"They play with remarkable intent the program shows clarity of articulation and an alertness that is good to hear." - David Moore, American Record Guide