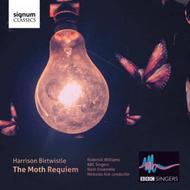 As 2014 marks the composers 80th year, Harrison Birtwistle remains one of the most popular voices in contemporary composition in the UK and beyond. This new collection of premiere recordings draws together recent commissions with older works to mark the occasion, with characteristically flawless performances from the BBC Singers under Nicholas Kok.

They are joined on this disc by the Nash Ensemble and baritone Roderick Williams.

This is the fourth in Signum's on-going series of composer-led releases with the BBC Singers, with past discs featuring the works by Judith Bingham, Richard Rodney Bennett, and most recently Edward Cowie.

Modernist bogeyman or Britain's greatest living composer? As Harrison Birtwistle approaches his 80th birthday this July, a number of new recordings will surely prompt a timely reappraisal of his output. The great paradox about Birtwistle's music is that, although it has frequently been embroiled in controversy, it is rooted in ages-old tradition. Classical and folk myths have been a continued preoccupation for him, and even his compositional techniques have something medieval about them (eg the frequent use of hocket, where the melody 'hiccups' between two or more voices), and numerical systems of organisation that owe much less to Schoenberg-style serialism than to the aesthetics of the middle ages.

Nowhere is that debt to tradition more apparent than in Birtwistle's choral music. While the multiple layers and 'theatrical' deployment of players in his instrumental works may sometimes prove elusive to wider audiences, the traditional roots of many of his choral works offer a far more accessible way into his distinctive soundworld, as John Fallas hints in his liner notes to this stunning new release from Signum Classics. Birtwistle has often talked about his music in terms of an object being viewed from a variety of different perspectives  like discovering the layout of a strange town by gradually wandering around its streets, for example. But in the selection of works on this new disc, it is primarily through the text that the listeners will find their bearings, in music of a lyricism, depth and resilience that may come as a surprise to many.

In truth, no-one who is able to appreciate the mastery of Britten's War Requiem is likely to have many problems with listening to these works which, though of very different provenance, are hardly any more forbidding. For those not yet acquainted with Birtwistle's art, an excellent starting point is Carmen Paschale, for four-part choir with a brief but enchanting cameo for solo flute. Setting a Latin Easter text by Sedulius Scotus, and commissioned for the 1965 Aldeburgh Festival, this contains moments of Stravinsky-like directness alongside some magically beautiful textures  such as the moment when the nightingale appears. Just as approachable is the Lullaby (2006), an exquisitely poised setting for divided sopranos of the Wedderburn brothers' celebrated 16th-century Marian text, 'O my deir hert, young Jesus sweit'.

Birtwistle's 1999 opera The Last Supper, to a text by Canadian poet Robin Blaser, dealt with the initiation of one of the most durable rituals of all, the Christian communion service or mass. Standing somewhat aside from the main action were tableau-like settings of three canonical Latin texts, the Three Latin Motets ('O bone Jesu', 'Pange lingua' and 'In supremae nocte cenae'). Though the musical language is unmistakably that of the late 20th century, the aura they convey is almost renaissance-like in its perfect sense of balance.

Of the three most substantial works on the disc, the earliest is On the Sheer Threshold of the Night (1980), a product of Birtwistle's fascination with the classical story of Orpheus and Euridice (a myth that has played an important role at key moments in musical history). Here the text is by the early medieval philosopher Boethius, sung in a mixture of the original Latin and Helen Waddell's English paraphrase, and the music proves intensely sensitive to the unfolding story as Orpheus turns to his beloved only to lose her again.

The Ring Dance of the Nazarene (2003), to a text by David Harsent, revisits the biblical story of the Last Supper, but this time as related by the apocryphal Acts of John, with an emphasis not just on ritual but on the very physical expression of a round-dance, with ritualised call-and-response structures, and with the role of 'The Nazarene' (i.e. Jesus) superbly sung here by baritone Roderick Williams. The instrumental accompaniment includes an Iranian drum, the darbuka, underlining the physicality of the ritual.

The most recent of the works on this disc is The Moth Requiem (2013), setting a poem by Robin Blaser which was inspired by the sound of a moth trapped inside the lid of a piano. It includes the incantation of the names of various moth species, some close to extinction, and its imaginative scoring  twelve female voices, alto flute and three harps  incorporates vivid evocations of the sound of the moth hitting the piano's strings. The textures conjured up by this seemingly insignificant memorialisation are as magical as anything in Birtwistle's recent music, combining wit, lyricism and subtle dynamism in equal measure.

The performances themselves, by the BBC Singers and the Nash Ensemble, conducted by Nicholas Kok, are staggeringly good: secure, expressive and extraordinarily supple. With excellent recordings from the BBC's Maida Vale studios, this disc is an ideal introduction to Birtwistle's endlessly fascinating and captivating music that will appeal as much to newcomers as to seasoned new music followers. It makes a very fine start indeed to the 80th birthday celebrations.