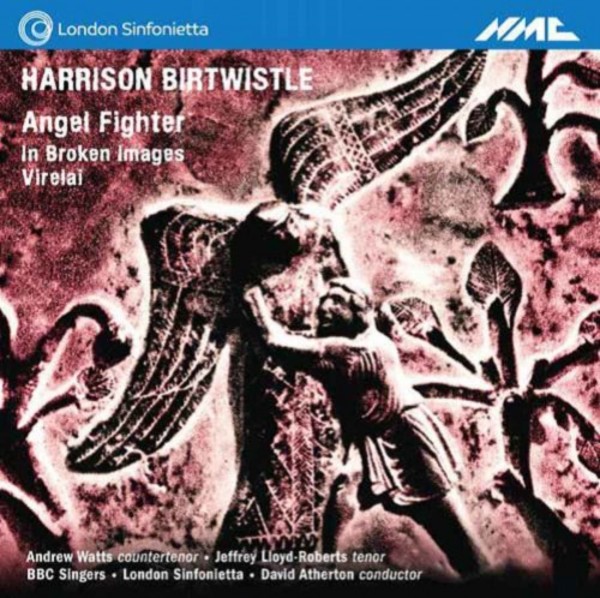 Harrison Birtwistle is internationally regarded as one of the most striking and individual composers today. His unique sound world runs the full gamut, from large-scale operatic and orchestral canvases, rich in mythical and primitivist power, to intimate chamber works, contemplative in their lyricism.

Described by The Guardian as 'hauntingly powerful', Birtwistle's cantata Angel Fighter vividly explores the Biblical story of the struggle between man and divine being from the Book of Genesis. Predictably, for a composer with a long-standing fascination in myth, drama and ritual, it's the physical fight between Jacob and the Angel more than religious significance, that interests Birtwistle: the tension, twists of pulse, sharp accents and jeering chants from the chorus make it feel more like a wrestling match than a life-or-death struggle. Quartertones and string harmonics enhance the otherworldly descent of the Angel (Andrew Watts) from Heaven and librettist Stephen Plaice makes clever use of Enochian, an angelic language 'discovered' by the 16th century alchemist and adviser to Queen Elizabeth I, John Dee.

In Broken Images, inspired by Gabrieli's multi-choir canzonas, splits the ensemble into four groups (woodwind, brass, strings and percussion) and takes its title from the Robert Graves poem. Birtwistle continues to draw influence from the past in Virelai (Sus une fontayne), a rhythmically intricate realisation of a piece by Johannes Ciconia, who flourished in the late Middle Ages, around the time that Chaucer was writing his Canterbury Tales.

Harrison Birtwistle's engagement with music of the past has been long and fruitful. Apart from several arrangements of music ranging from Machaut and Ockeghem to Bach, his compositional strategies and techniques owe much to a range of precursors, from the medieval to Stravinsky and Varèse, albeit filtered through his own uniquely resilient modernist language. The three works on this latest disc from NMC, all recorded in concerts, bear eloquent witness to Birtwistle's ability to create something distinctively new from aspects of the past.

At just over half an hour, the main work is Angel Fighter, a dramatic cantata commissioned for the 2010 Leipzig Bachfest, and premiered in the historic Bach church of St Thomas's. The libretto by Stephen Plaice expands on the Old Testament story of Jacob's physical contest with an angel of God. Alongside the main characters of Jacob (tenor) and the Angel (countertenor), there is a chorus which comments on the action as well as challenging Jacob, and a chamber ensemble of strings, woodwind and brass. Birtwistle has set biblical subjects before, notably in the opera The Last Supper (1999) and its pendant The Ring Dance of the Nazarene (2003). In Angel Fighter it is Jacob's journey of self-discovery and the ritualistic playing-out of the wrestling match that appeal to him most, and there are clear echoes of his 2008 opera The Minotaur. But Angel Fighter is a significant work in its own right, its 'action' played out with a sure pace, and this is some of Birtwistle's most visceral music of recent years. Particularly striking are the scoring of Jacob's aria ('Did I push angels up the ladder to heaven?'), the Angel's initial entry from the distance, the tough, sinewy music of the contest itself (the threefold clash played out like a game), and the Angel's concluding aria, scored with Bach-like overtones for cor anglais and harp ('No river needs a name to flow').

Jeffrey Lloyd-Roberts and Andrew Watts excel as Jacob and the Angel, bringing the narrative vividly to life and projecting the text with great clarity, while the interjections of the BBC Singers are powerful and arresting, and the players of the London Sinfonietta easily rise to the score's formidable demands.

In Broken Images is a work for instrumental ensemble whose title is taken from a poem by Robert Graves: 'He is quick, thinking in clear images; / I am slow, thinking in broken images. / He becomes dull, trusting to his clear images; / I become sharp, mistrusting my broken images.' These lines neatly sum up Birtwistle's slow-yet-sharp musical style, and the music itself is as inexorable yet incisive as this suggests. The instruments are spatially organised in four 'choirs': percussion at the rear, brass to the front, strings on the left and woodwind on the right, recalling the polychoral music of Gabrieli. These groups sometimes overlap, while at others they are fractured still further, yet there is a clear albeit indefinable logic to the continuity. Latest in a long line of commissions for the London Sinfonietta, In Broken Images is a particularly compelling addition to the catalogue, its demands virtuosic and challenging, its music consistently gripping.

The shortest and most recent work here is Virelai (Sus une fontayne), a lively reworking of a piece by Johannes Ciconia, itself influenced by the complex style of the late 14th-century ars subtilior. This is music that obviously appeals to Birtwistle, and the arrangement  very much in the style of his earlier reworkings of Machaut  makes for a spirited conclusion to the disc.

Credit must go to NMC for this addition to the Birtwistle discography, but above all to the London Sinfonietta and its founder conductor David Atherton. Their association with Birtwistle goes back four decades, and these committed and assured performances amply demonstrate why the relationship has been so enduring.