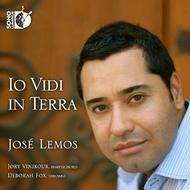 Artistically breathtaking and engagingly intimate, the vocal music of the early Italian Baroque was an exercise in close artistic collaboration. Bringing together three of the most renowned practitioners of historically-appropriate performance of Early Music and Baroque repertoires, the Sono Luminus release of 'Io Vidi in Terra' provides a rare immersion into a mysterious world that, despite its relative obscurity in the perspectives of 21st-Century observers, shaped almost every aspect of music as it blossomed in subsequent generations.

Born in Brazil, countertenor José Lemos pursued musical studies in the United States, where he earned a Bachelors Degree in Music from the College of Charleston (South Carolina) and a Masters Degree in Opera Performance from the New England Conservatory of Music in Boston. Awarded Tanglewood Music Fellowships in both 2003 and 2004, his first operatic performances in the United States were in Robert Zuidams 'Rage dAmours' and Benjamin Brittens 'A Midsummer Nights Dream' at Tanglewood. He also won both the First Prize and the Audience Prize at the 2003 International Baroque Singing Competition in Chimay, Belgium.

From those beginnings, Josés operatic career has flourished, with lauded appearances at Opernhaus Zürich as Nireno in Händels 'Giulio Cesare' and Narcisco in the same composers 'Agrippina', both under the baton of Marc Minkowski, an extensive tour with Stefano Landis 'Il SantAlessio' in a production with Les Arts Florissants and William Christie, to name just a few.

José has recorded multiple albums with Dorian/Sono Luminus over the years. He is thrilled to share his passion for the Italian vocal music of the 17th Century with friends and frequent collaborators Deborah Fox, theorbist and baroque guitarist, and Grammy nominated harpsichordist Jory Vinikour, as well as with listeners throughout the world.