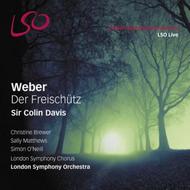 'Der Freischütz' is heralded as one of the cornerstones of Romantic opera, drawing on traditional German folk tunes and elements of Romanticism for the first time in the history of opera. The evocative and colourful orchestration is particularly impressive in the 'Wolfs Glen scene: often considered the most gruesomely expressive rendering of evil to be found in a musical score!

All three soloists are well established on LSO Live: Opera News declared the Verdi Requiem (LSO00683), featuring Christine Brewer, as "one of the finest recordings the work has ever received". Sally Matthews, who has performed regularly with Sir Colin Davis, was praised in her role in Haydn's 'Creation' (LSO0628). Simon ONeills previous appearance on the label, in the title role of Verdi's 'Otello' (LSO0700) saw much critical acclaim, and confirmation that "he is the best heroic tenor to emerge over the last decade" (The Telegraph).

Concert Reviews:
"The performances many virtues  not least the gloriously assured playing of the orchestra, and the impressively sustained Wagnerian grandeur of Daviss conducting  suggest it [the recording] will be a recommendable issue." - Opera

"Viewing Weber as one of Wagners major precursors, Davis presents the opera on the grandest of scales, with big orchestral forces, and a pair of established Wagnerian leads in Simon ONeills Max and Christine Brewers Agathe." - The Guardian