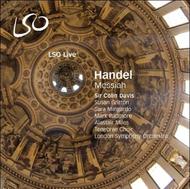 Sir Colin Davis' final performances as Principal Conductor of the London Symphony Orchestra in December 2006, prior to taking up the position of President of the orchestra, featured Handel's Messiah. Sir Colin's previous recording of Messiah, made in 1966, was for many years the most popular of the work. On this new version, featuring an edition of the score prepared by Sir Colin himself, he is joined by a magnificent group of singers as well as the sensational Tenebrae Choir.

Handel's masterpiece uses short texts from the Bible to tell the story of Christ's birth, death and resurrection. Imbued with a deep humanity and written with the imagination of a composer at the peak of his powers, Messiah includes some of Handel's bestloved music.

For a limited period all copies of the 2 SACD set will include a bonus DVD featuring highlights from the performances and an interview with Sir Colin Davis. English only (no subtitles). A co-production by the BBC and LSO.
2 Hybrid SACDS + Bonus DVD (40 min inc Sir Colin interview)
Region 0, NTSC, 16:9