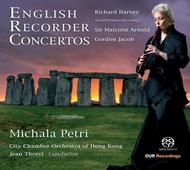 Suite for recorder and strings

Suite for recorder and strings

The recorder has been part of Western music for more than seven hundred years, during which time it has enjoyed a particularly special relationship with the composers and musicians of England. The present recording showcases the music of three generations of English composers who have embraced the recorder, making significant contributions to the repertoire in the process. Gordon Jacob, the eldest, composed numerous works for the recorder from the 1950s up until his last year.

Sir Malcolm Arnold was to follow Jacobs example, contributing his Concerto for Recorder, originally written for and premiered by Michala Petri. Arnolds amphibious existence as a composer for both film and the concert hall is echoed in the career of our youngest contributor, the BAFTA award-winning composer and recorder player Richard Harvey.

The result? Pure musical enchantment! Jacob's delightful Suite has been a mainstay for recorder players (and an audience favourite) since its premiere, while Arnold's rarely performed concerto is a late masterwork truly deserving a wider audience, making a most welcome return to the catalogue. The program is capped off by Harvey's magical Concerto Incantato (composed especially for Michala) - a true concert piece for the Harry Potter generation.

The highlight of the evening came... with the world premiere of Richard Harveys Concerto Incantato, a work written specifically for this concert and for Michala Petri and five (or perhaps it was six?) of her recorders... Harveys work brings together a broad range of musical influences...oozing walls of warm string harmony and a distinct story-telling quality  a highly consumable work commandingly performed. - Mark Tjhung, Time Out Hong Kong

This is the world premiere recording of Richard Harveys Concerto Incantato and the only available recording of Malcolm Arnolds late Concerto.