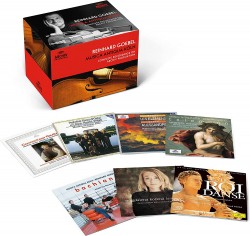 Released to coincide with Reinhard Goebels 75th birthday, Deutsche Grammophon have gathered together all the recordings he made for Archiv Produktion with his own ensemble, Musica Antiqua Köln, between 1977 and 2004. Its a mouthwateringly substantial box: 75 discs in all, housed in handsome original jackets sleeves reflecting the gradual changes in Archivs house style between the late 1970s and the first years of the new millennium. With so many works of short, multiple tracks, the booklet is largely given over to a comprehensive track listing, but theres room for an informative background article by Martin Elste, as well as a revealing new interview with Goebel himself.
Musica Antiqua Köln (MAK) was founded in 1973 by Goebel and fellow students at Colognes Hochschule für Musik, and Goebel himself  a relatively late-starter on the violin, which he took up at the age of twelve  studied with such respected figures as Franzjosef Maier, Saschka Gawriloff, Marie Leonhardt and Eduard Melkus. MAKs first LPs were made for the Aulos label, and in March 1977 they recorded a disc of Virtuoso German Violin Music of the 17th century for EMI Electrolas Reflexe series, before being snapped up by Archiv Produktions director, Andreas Holschneider. Their first Archiv disc was an album of Neapolitan recorder sonatas, set down in November 1977, but it was their 1979 appearance at the English Bach Festival that really put the young ensemble on the map.
An encounter with musicologist Christoph Wolff led to a series of Bach recordings, including refreshingly iconoclastic accounts of the Orchestral Suites and Brandenburg Concertos (including what must still qualify as the fastest Brandenburg 3 on disc) and all of the chamber music, but it was their tireless forays into lesser-known repertoire that really set Goebel and MAK apart. Their recordings of music by the wider Bach family, in particular Johann Sebastians numerous forebears, opened up a new world of delights for lovers of Baroque music, and their 1986 recording of Cantatas by the Bach Family before Johann Sebastian can still hold its own against subsequent entries in the field.
MAKs early recordings focussed on chamber music, but gradually the ensemble grew to include a wider set-up, making larger-scale ensemble works as well as vocal collaborations possible. At the centre, however, was Goebel himself, hardly a conventional virtuoso, but with an unmatched passion for researching new repertoire from the original sources, as well as a very distinctive tone. If Nikolaus Harnoncourts Concentus Musicus Wien was characterised by the bucolically sawing sound of the lower strings, the hallmark of Goebels more dazzlingly virtuosic MAK was the febrile vibrato from the violins, which ensured that everything they played had a pronounced intensity to it (comparable to Carlos Kleiber in the music of the Strauss family).
By his own admission, Goebel was uninterested in much music after 1749  something which set him apart from those rivals who sometimes appear to have used Baroque music as a stepping-stone to music of the Classical and Romantic eras. But his single-minded concentration on a repertoire from Monteverdi to (at the latest) at Haydn, with a particular emphasis on North German and French music, led to an expansion of the recorded repertoire that helped lay the foundations for many later ensembles. MAKs award-winning 1992 recording of concerti by the Dresden composer Johann David Heinichen is among this sets outstanding features, but so too are works by Biber (ranging from the seminal Mystery Sonatas to the opulent grandeur of the Missa Salisburgensis, the latter a collaboration with Paul McCreeshs Gabrieli Consort & Players) and Telemann (the complete Tafelmusik, Water Music and Flute Quartets, the latter being MAKs final recording for Archiv in 2004, two years before Goebel retired and they disbanded).
Beyond the German Baroque repertoire, the discs of Charpentier and Couperin are particularly fine, as is the acclaimed selection of music by Lully recorded for Gérard Corbiaus 2000 film Le Roi danse. Italian music  which Goebel initially fought shy of, apparently because of the pre-eminence of I Musici  includes some splendid chamber concertos by Vivaldi, and overtures by the Dresden-based Francesco Maria Veracini. The 1993 disc of Handel cantatas and arias with Anne Sofie von Otter was made before the current fashion for the composers early Italianate output, and theres even some Purcell in the mix.
The quality of Goebels collaborators speaks for itself  apart from von Otter, soloists include Dorotea Röschmann, Christina Schäfer and Magdalena Koená  while his MAK colleagues have included keyboard players Andreas Staier and Robert Hill, as well as flautist Wilbert Hazelzet (his tone so well-matched with Goebels own), all subsequently renowned as soloists in their own right. (Goebel himself had to relearn violin technique from scratch, after a diagnosis of focal dystonia in the left hand, so that he eventually reemerged as the worlds formost left-handed violinist.) A particularly attractive feature of the accompanying booklet is the range of artist photographs, showing how clothing  and, indeed, hairstyles!  have changed over the decades. Should compact discs become entirely obsolete, future students of fashion will still find much to mull over in this set!
As it is, this box is a musical cornucopia, from a group of performers who marked the transition from the first generation of original instrument ensembles to a new, altogether more accomplished, characterful and unorthodox approach, whose contribution to our present-day attitudes towards HIP music-making cannot be overstated. Dip anywhere into this set and you will find performances of extraordinary vibrancy and resilience, not to mention hour upon hour of enjoyment. At the asking price, these 75 discs are a real bargain.

Richard Taruskin, who died last month at the age of 77, was one of the dominant figures in musicology of the last 40 years. Born on 2 April 1945 into a Jewish family of Russian heritage, in his early years he studied cello, then went on to study music at Columbia University, preparing his PhD on neglected Russian opera of the 19th century under the guidance of his mentor, Paul Henry Lang. Langs own magnum opus, Music in Western Civilization (1941) was among the first books to place classical music in its wider social and... read more

A Question of Taste

One of the droller jokes to do the rounds during the COVID-19 pandemic was the teasing of friends that they wouldnt know if they had the illness, as they never had any taste in the first place. When we talk of artistic taste, we touch on an enormous subject. It can refer, like the taste of food we eat, to a purely sensory experience: whether we find the music (or poetry, or painting, or film) appealing, sweet, vibrant, sour, and so on. But it can also reflect a dimension that verges on the moral: we often refer not just... read more