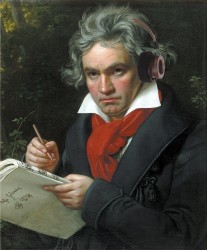 Ever keen to keep abreast of the latest trends, weve been given pause for thought by two recent news items and how they might relate to the world of classical music. The first was an article on the BBC News website about the impact that Artificial Intelligence (AI) is having on the world of professional tennis. Statistical analysis in the form of data analytics from matches involving leading professional tennis players has been harnessed in a range of apps and techniques. There are also video programmes that can analyse any given players technique. All this information and technology can then be used by coaches and players to improve their own game.

In the world of music, the closest analogy is obviously the use of recordings not for entertainments sake but to analyse either ones own or anothers performance. Yet there are a number of difficulties with such an approach. Anyone who has listened to a tape recording of their own voice will know how unsettling the experience can be: what one hears from within ones head while speaking can seem quite alarmingly different from what comes out of a playback device, however sophisticated. So it is with music: although it can be extremely useful in highlighting mistakes or (for example) awkwardnesses in phrasing and breath control, judging ones own performance in this way can lead to paralysing self-consciousness  quite the opposite of helpful! And the dangers can even multiply when watching a video. This is one reason why so many professionals, when recording, instead use the expert pair of ears provided a record producer who, in collaboration with the technical expertise of the engineer, can enhance the strengths of a recording in ways that a self-conscious performer often couldnt possibly match.

There are, of course, performers who have embraced technology, none more famously than conductor Herbert von Karajan: hundreds of photos of him sat by the mixing desk testify to his commanding (his detractors would say controlling) presence at all stages of the recording process. For some, his performances on disc come across as just too streamlined, too managed, compared with the more urgent spontaneity (and even occasional sloppiness) of such temperamentally different figures as Toscanini, Furtwängler, Erich Kleiber or Hans Knappertsbusch  none of them technically-minded, and to varying degrees antipathetic to the recording process. The controlling nature of Karajans art comes across most clearly in the videos, where ranks of brass held at precisely the same angle are the result of miming under the maestros beady eye to the existing audio track: an act of pure fakery whose illusion demonstrates perhaps better than anything else why Karajan and the recording industry were made for each other. At least he didnt get orchestras to mime to their own recordings in live concerts (something not unknown in the world of rock and pop), which is probably why his live recordings  especially the really live (i.e. single-take) ones on such labels as Orfeo dOr and Testament  are often so much more musically interesting than the studio ones.

Another technique from the pop world - the use of pitch-correcting autotune programmes  has not (we hope!) been widely used in the classical world. Performers are usually trained to a sufficiently high level that, together with a sympathetic conductor and/or producer, they can normally be relied upon to deliver acceptable intonation, particularly when under the unforgiving glare of the microphone.

One area where AI is beginning to make a difference in classical music is in the realm of composition. Here, however, we are not talking about electronic composition as practised by a wide range of modern (and modernist) composers, from Varèse, Xenakis and Stockhausen up to the present day, which has an impressive pedigree at the technological vanguard. Rather, it brought to mind the recently publicised use of AI to compose a Scherzo from Beethovens Tenth Symphony for which only the barest fragmentary sketches survive. Unlike an earlier scholarly completion of the same works first movement by the musicologist Barry Cooper, this recent job feels a rather detached affair, even when played (in a recording viewable on YouTube) by a group of clearly able and committed performers. Although the Rutgers University-based team have done an impressive job in teaching an AI programme to compose in the style of Beethoven, the result comes across as a piece of highly competent student pastiche, while sorely lacking the (super-)human element, the unexpected twists, the sudden emotional piercings that Beethoven of all composers was so supreme at deploying.

This delving into the realms of what might have been brings us neatly to another recent news story (this time courtesy of The Guardian) that explored the use statistical modelling to calculate roughly how many books written in the past have been irretrievably lost to the ravages and vicissitudes of time. The related research led by Mike Kestemont and Folgert Karsdorp makes for sobering contemplation: no less than 90% of all medieval manuscripts preserving such ancient narratives as the Arthurian legends and the story of Siegfried are likely to have been lost.

How might this be reflected in the situation with music? Compared with writing, the emrgence of regulated musical script was a relatively late development, yet the possibility that hundreds, perhaps thousands of examples of medieval chant and early polyphony have been lost to events like fires, decay and artistic, religious or political censorship must be acknowledged. In England, the dissolution of the monasteries under Henry VIII will certainly have destroyed many examples of medieval and early Renaissance polyphony. It is largely because his music was so admired on the continent that John Dunstaples output is better preserved than that of many of his English contemporaries.

War, fire and even simple changes in fashion can account for such losses as a good fifth (a conservative estimate) of Bachs cantata output, as well as at least a couple of Passion settings. In more recent history, Sibelius is thought to have burned the manuscript of his Eighth Symphony in a fit of self-criticism, much as Brahms, a generation earlier, destroyed all traces of a series of early string quartets that he judged not up to scratch. That is the creators prerogative. But unexplored libraries may yet contain unexpected surprises (dare one hope for any of Monteverdis lost operas?), either in as-yet uncatalogued or misfiled volumes, or even (as is often the case with earlier music) used as binding material for later, quite possibly non-musical books.

Not everything that turns up from the past will be a work of genius, and some of the discoveries announced in recent years have been less earth-shattering than the publicity bumph makes out. Yet the emergence of lost and forgotten music (as demonstrated by the re-emergence of works by such tragically fated composers as Erwin Schulhoff and Pavel Haas) can refreshen a repertoire that, without continued exploration and (re)discovery, would risk turning stale. As much as being open to newly-created music by our contemporaries, we owe it to ourselves and to music to be receptive to new discoveries when they come along, enriching and sometimes even radically changing our perspectives on the music of the past.
Further reading:
How an AI finished Beethovens last symphony https://www.sciencefocus.com/news/ai-beethovens-symphony/
The big idea: could the greatest works of literature be undiscovered? https://www.theguardian.com/books/2022/may/30/the-big-idea-could-the-greatest-works-of-literature-be-undiscovered