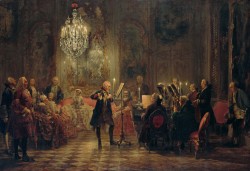 Increasing numbers of editions of Early Music repertoires (everything from the Baroque and before) fostered a growing interest among performers. Among the first to take a deeper interest in such repertoires were instrument player and manufacturer Arnold Dolmetsch (1858-1940) and his family who, individually and as a consort, played works that he had personally sought out in the archives of the British Library. Together with harpsichordist Violet Gordon Woodhouse they were also some of the first Early Music pioneers to be committed to disc, from Elizabethan consort music to Scarlatti and Bach. So was the great Wanda Landowska with her specially manufactured Pleyel concert harpsichord  a monster of an instrument which bore little relation to historic models but which by all accounts came as a breath of fresh air to those who heard her perform live.

Notwithstanding the work of these pioneers, the Early Music movement as we know it really got going in the post-war years of the 1950s and 60s. As weve already seen, Thurston Dart and his pupils played a crucial part in Britain, but it was the increasing technical polish of a generation of Dutch and Belgian musicians  Gustav Leonhardt, Frans Brüggen and the Kuijken brothers  who set down a marker with their finely nuanced performances of Baroque music, together with the somewhat earthier style of the Austrian Nikolaus Harnoncourt and his Concentus Musicus Wien. As well as presenting exceptionally vivid and fastidiously researched performances of music from the early and middle Baroque, their performances of Bach and Handel made a clean break with the accrued performance traditions of the Romantic Bach revival.

The situation was more precarious with medieval and Renaissance repertoires. Although strictly speaking there was no continuous tradition of Bach performance dating from his own time (a hiatus of several decades came between the deaths of Bachs sons and the public revival of his music by Zelter, Mendelssohn et al.), the more or less continued use of Bachs music in pedagogy had ensured that most musicians felt a sense of connection when confronted with it as performers. Renaissance and medieval repertoires, however, required more of a leap of faith: not so much the revival of a tradition as a re-creation or reinvention. Michael Morrow with his Musica Reservata and David Munrow with the Early Music Consort of London attempted to cultivate renewed performing traditions via their experiences of Mediterranean and even South American cultures, but their approach (and the paucity of surviving information on the performance of medieval and Renaissance music) necessitated a huge amount of guesswork and creative imagination, and the results, for all their undoubted liveliness, were often rough and ready.

By the 1970s, Early Music had entered a rather dogmatic phase: the term authentic music gained widespread currency, and its practitioners became more insistent that theirs was the only right way to perform music of the Baroque and even Classical eras. The cleaned-up graphic style of the mushrooming numbers of collected editions and Urtexts was matched by a squeaky-clean manner of playing, shorn of vibrato, often rich in ornamentation and lozenge-shaped mannerisms, but with a sense of involvement often curiously lacking. Listening now to Early Music performances from the 1970s and 80s, some of them sound distinctly anaemic. There was also a suspicion (founded, perhaps, on a grain of truth, but in most cases unjustified) that players and singers who couldnt hack it in standard repertoire turned to Early Music instead. Notable critical articles from Charles Rosen and Richard Taruskin among others prompted angrily defensive responses, but may also have prompted some overdue soul-searching.

From the last decade of the 20th century to the present day, there has been a marked dialling-down of authenticist rhetoric, an acknowledgement that for all the evidence in the world we can never know what was really going on in a composers head, nor what Baroque musicians and their audiences really sounded like and heard  even less so with earlier music. This moment of recognition has coincided happily with two phenomena in particular. Firstly, a growing number Early Music pioneers have turned teacher and even grand-teacher themselves, giving birth to something that the pioneers themselves often lacked: a sound grounding and training in earlier repertoires, rather than the autodidacticism of old. The results may have led to a greater homogeneity of playing styles (and recordings, with their quest for ultimate perfection  whatever that is  have much to answer for too), but within those parameters there is also a wide variety of nuance and approach, and less reliance on cliché at the expense of imaginative musicianship.

Secondly, at precisely the moment that the Early Music movement recognised that there was no such thing as objective truth in matters of performance, established traditional orchestras and ensembles began to embrace many of the more important innovations of the historically-informed style. Constant legato phrasing, blanket vibrato, machine-like staccato in fast passages, vast string sections in Haydn, Mozart and Beethoven, became things of the past. Conductors like Abbado and Haitink followed the pioneering lead of Mackerras in adopting period style for performances of classical and early Romantic repertoire, with slimmed down string sections and even natural brass and calf-skin timpani. Period performers were invited to conduct modern-instrument orchestras, while conductors of conventional orchestras made the journey in the opposite direction, often with remarkable results.

At the same time, and against the growing globalisation of music, the increasingly sound foundational training of musicians in earlier repertoires has led to an extraordinary flowering of groups performing the music of their home turf. Italian groups like La Venexiana, La Compagnia del Madrigale and Concerto Italiano present stunningly idiomatic performances of the great Italian madrigalists, while a growing number of French groups led by William Christies Les Arts Florissants have similarly revealed to international audiences the heady, seemingly endless delights of the French Baroque. Meanwhile, harpsichordists like Andreas Staier and, of the younger generation, Mahan Esfahani and Benjamin Alard have shown that instrumental virtuosity and an imaginative, colourful response to the musical text is by no means the exclusive preserve of the great pianists  and, moreover, does not preclude a through grounding in sound scholarship and knowledge of the sources.

Next time: a closer look at current trends in medieval and Renaissance performance

Released to coincide with Reinhard Goebels 75th birthday, Deutsche Grammophon have gathered together all the recordings he made for Archiv Produktion with his own ensemble, Musica Antiqua Köln, between 1977 and 2004. Its a mouthwateringly substantial box: 75 discs in all, housed in handsome original jackets sleeves reflecting the gradual changes in Archivs house style between the late 1970s and the first years of the new millennium. With so many works of short, multiple tracks, the booklet is largely given over to a... read more