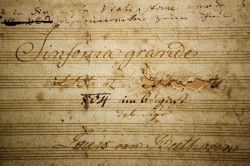 These days, genre looms large in the music world. Its an affliction that looms large in the world of popular music, with various new types of pop and rock music emerging on an almost annual basis. In classical music, the situation appears to be more stable, at least on first appearances. The venerable Gramophone magazine has for many years divided its reviews into orchestral, chamber, instrumental (just one player), vocal (anything sung that isnt opera) and opera, with a separate section for Jazz & World Music. Other publications go further: BBC Music, for example, separates concertos from orchestral, and devotes a separate section to historical recordings.

Awards go even further, with categories for early and contemporary music, choral and solo vocal, best newcomer, lifetime achievement, and so on. This enables yet more prizes to be awarded, in an industry that needs all the attention it can get. Even here at Europadisc, we list releases on our website according to certain genres: orchestral, chamber, instrumental, vocal/choral, opera, ballet, jazz, soundtrack, Christmas (for those seeking out something festive: its surprising how many releases under this category sell out of season) and documentary (mainly for DVD/Blu-ray releases but occasionally  as with a forthcoming release of the 1953 Coronation ceremony  CDs as well).

Very often, however, a single categorisation wont do: at what point does a large ensemble become an orchestra? What about, say, Bachs orchestral suites and Brandenburg Concertos (traditionally regarded as orchestral works, but these days more often performed by an augmented chamber ensemble, sometimes with as few as one player per part)? Does an audio recording of Stravinskys Firebird or Debussys Jeux fit best under orchestral or ballet (when the vital component of a ballet  the dancers  is missing)? And then there are the numerous discs which contain a mixture of instrumental and chamber, vocal and operatic, orchestral and choral In these instances, we have a catch-all solution: we just leave the genre box blank!

Human beings love to organise things, for which theres abundant evidence even before Plato came up with his Forms and Aristotle his Categories. Time and again, however, we encounter the problem of items that just wont fit: either a new category or an entire new system is called for, of overlapping sub-genres, or an abandonment of any systematic straitjacket whatsoever. Sub-genres and alternative systems are useful  according to period, for example: Medieval, Renaissance, Baroque, Classical, Romantic, 20th-century, New Music In the 19th century, three broad yet distinct arenas held sway: music for the concert hall (whether recital or orchestral/choral, often mixed up far more imaginatively than they are today), opera, and domestic music-making (the latter now not even a memory for most of us). Nowadays there are collectors who will buy only recordings of Italian bel canto opera, even some who will buy only music by one composer (often Philip Glass) or even one work (Bachs Goldberg Variations, naming no names!).

Where genres and types become so specialised and focussed that they lose any wider relevance or application, they cease to become useful. But the application of more general categories can often cause controversy too. A few years ago, I had an argument with a friend (a retired professor of music) about symphonies. Quite how we got onto the subject is now rather hazy, but I asked whether he thought Stravinskys Symphony of Psalms and Symphonies of Wind Instruments could be classified as symphonies. The answer was more decisive than Id expected: Of course not! So then I tested the waters a bit further: what about Haydns symphonies (yes), and Mahlers (again, yes), but then going back again: Johann Christian Bach? No. Even though many of those three-section operatic-style sinfonias lay the groundwork in the genre for Mozart and Haydn? Well And finally I realised that Id hit on something. My friend was answering a slightly different question from the one asked: whether the works under discussion were, in his opinion, symphonic  an adjective which raises all sorts of questions about largely German-speaking cultural judgements of formal, structural and motivic integrity.

As a genre, the symphony has its roots in the Baroque sinfonia  a term applied both as an alternative to the (four-movement) sonata da chiesa (cf. Haydns Symphony no.49 La Passione), and to non-vocal preludes, interludes and even postludes in vocal and operatic works (J.S. Bachs cantatas contain many fine examples, not always as opening movements). The word symphony, of Greek origin, means sounding together, so that it could in theory be applied to any work where two or more performers are involved. And Bach even used the term for his 15 three-part keyboard inventions, where it is not three players but three separate lines, all played by one performer, that are sounding together.

The three-movement Italianate operatic sinfonia (of the sort composed by J.C. Bach) was a direct influence on Mozart, whose Symphony no.32 in C major, K318, is a fine exemplar of the genre, which finds its glorious apotheosis in the Prague Symphony (no.38 in D major, K504). But by Mozarts time the symphony had already arrived at the four-movement structure which provided the norm for Classical and Romantic composers. Yet five-movement symphonies can be found even in Haydns output, and Beethovens Pastoral is the most famous classical example, while Mahler favoured the five-movement ground-plan in three of his completed works in the genre (not to mention the first version of the First Symphony and the uncompleted Tenth).

Historic precedent is one thing, but how to explain the designation of Mahlers Eighth (the Symphony of a Thousand)  a vast two-part work featuring singing throughout  as a symphony? By the turn of the century, questions of genre were largely determined by the intention of the composer: if they felt that the work was a symphony (as Havergal Brian did with his comparably extravagant Gothic Symphony), then symphony it was. And even before Beethovens Eroica (1803), programmatic elements of a type more popularly associated with later Romanticism had been made extensive use of, often in neo-Barqoue fashion as in some of Haydns earlier symphonies.

As a genre, the symphony fell into relative disuse in the post-World War II years, although some of the most popular examples  Rachmaninov, Sibelius, Shostakovich, Elgar, Vaughan Williams  were composed in the 20th century. But works like Stravinskys mentioned above arguably present us with a thought-provoking return to the words orgins, in a manner that could only have come from him. Although it may now feel that the symphony has had its day, especially compared to the more durable concerto, who can know whether a revival might be on the cards? Yet the terminological dilemma faced by composers, musicologists and critics illustrates how flexible any attempt at categorisation by genre needs to be (and how dangerously limiting it can be) when faced with the kaleidoscopic variety of artistic reality.