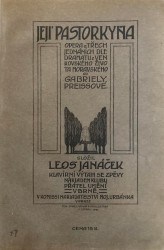 Few music lovers today would disagree with the assertion that Leo Janáček made some of the most distinctive and individual contributions to the operatic repertoire of the 20th century. His greatest operas, most of them comfortably under two hours in length, pack a powerful emotional punch out of all proportion to their compact dimensions, characterised by a pithy musical language that thrives on bold sonorities and contrasts, and a vocal style that is deeply rooted in the rhythms and shapes of the Czech language. Yet his achievement and its subsequent recognition were hard-won, as is vividly illustrated by his breakthrough work in the genre, Jenůfa.

Janáčeks first two operas had been in the tried-and-tested Czech genres of national epic (árka, 1888) and village comedy (The Beginning of a Romance, 1891). Only in recent years has the former gained a slender foothold in the repertoire, while the latter was judged a failure even by its composer. For his third opera, Janáček struck out in a new direction, that of operatic Naturalism, itself closely linked to the Italian verismo movement. The operas Czech title, Její pastorkyňa (Her Stepdaughter) is taken from the 1890 stage play by Gabriela Preissová on which it is based. Beyond the Czech-speaking lands it is known simply as Jenůfa, the name of one of its central characters.

Preissovás drama, based on two real-life events, is set in a small rural community centred on a mill. It tells the tale of the attractive young Jenůfa and her stepmother the Kostelnička (a title denoting her position as sacristan of the local church), and of Jenůfas two cousins, her sweetheart teva (the young, handsome but wayward mill owner) and his half-brother, the diffident and jealous Laca. Already secretly pregnant by teva, Jenůfa is relieved that he has escaped conscription, but aghast when the Kostelnička demands that he abstain from drink for a whole year before granting him Jenůfas hand. Jenůfa rebuffs Lacas jealous taunts, and he lashes out with a knife, slashing her cheek but immediately remorseful. From these melodramatic beginnings, Preissová unfolds a gripping drama of emotional turmoil, rejection, infanticide, paralysing guilt, community outcry, forgiveness and personal growth through acceptance of love.

Janáček took the bold decision to set Preissovás prose text more or less unaltered, though considerably condensed in a libretto he himself prepared (verse librettos were still the overwhelming norm for turn-of-the-century operas). He began work in earnest on the score in the mid-1890s while still in his early 40s. After completing the first of the operas three acts, he took a break to concentrate on other projects, resuming in 1901, and completing it by mid-March 1903, its latter stages overshadowed by the illness and death of his daughter Olga, to whose memory the opera was eventually dedicated. Janáček initially hoped to interest the Prague National Theatre in taking the work, but had to make do instead with a premiere in his adopted hometown of Brno, where his Moravian music drama was staged on 21 January 1904 (the composer now just a few months shy of his 50th birthday) with makeshift sets and an orchestra considerably smaller than the one he envisaged.

Although scoring a notable success with local critics  hailed for its evocation of a distinctly Moravian rural milieu and for its emotional truthfulness  Jenůfa was dismissed by most of the Prague press as a purely local phenomenon. Over the following years, Janáčeks supporters tried, initially without success, to win its acceptance in Prague. In the meantime, a series of revivals in Brno and the Moravian provinces gave Janáček the opportunity to make a series of far-reaching revisions, including cuts and improvements to the shape and stress patterns of the vocal lines. The publication in 1908 of a limited edition vocal score in Czech did little to improve its prospects. But the composers friends were persistent, and on 26 May 1916  over twenty years after it was first conceived  Jenůfa was finally performed at the Prague National Theatre, albeit on the condition of further extensive cuts and retouchings by its conductor, rival composer Karel Kovařovic (18621920). Performed at a time of increasing Czech national consciousness, the opera was a huge success. Even more crucial to its wider acceptance were critically acclaimed performances in Vienna (1918, where the great Maria Jeritza sang the role of Jenůfa) and Berlin (1924, conducted by Erich Kleiber), which ensured its place on the operatic stages of the German-speaking world.

However, despite these early successes, and a 1924 premiere at New Yorks Metropolitan Opera also starring Jeritza, Jenůfa only really began to catch on at the international level from the 1950s (the UK stage premiere, conducted by Rafael Kubelík, was as late as December 1956). Wider popularity came when, under a new generation of stage directors, the opera shed the most obvious external trappings of folklorism  when, in the late John Tyrrells memorable phrase, Jenůfa got out of her boots, and this trend went hand-in-hand with efforts to unpick Kovařovics retouchings. Between them, Tyrrell and Sir Charles Mackerras doggedly restored the 1908 Brno version of the score, which has served as the basis of most successful productions and recordings from the mid-1980s onwards. In 2004 a production by the Warsaw Chamber Opera went even further, staging the first modern revival of the 1904 version, predating Janáčeks own extensive revisions to give some idea of what the operas first Brno audiences experienced.

As striking as its evocations of Moravian folk life are, Jenůfa is remarkable for its bold orchestration (not least the recurring clatter of the xylophone in Act 1 to evoke the turning of the mill wheel), its moments of uninhibited lyrical beauty (notably Jenůfas Act 2 prayer Zdrávas královno [Salve Regina]), its sure-footed pacing and the way in which Janáček makes all too tangible the emotional claustrophobia of a small community, with even the minor roles vividly drawn. For all the oft-repeated myths of folksong and speech-melodies (the latter convincingly debunked by Tyrrell as long ago as 1970), it is the way in which Janáček employs small-scale orchestral motifs to delineate character and build long-term tensions that represents the real musico-dramatic breakthrough here, from the bustle of the Mill Foremans Act 1 entrance, through the psychodrama of the four main characters in Act 2, to the terrifying commotion at the climax of Act 3 and the urgently uplifting final scene. As suggested by the operas original title, this is a work about not one character but the relationships between several. That, and the continuing potency of many of the issues it raises (vividly realised in Katie Mitchells recently revived production for Welsh National Opera), have ensured its place as the most popular of all Janáčeks operas.

Jenůfas belated success helped to give Janáček the creative self-confidence to write his remarkable quartet of late operas  Káťa Kabanová, The Cunning Little Vixen, The Makropulos Affair and From the House of the Dead  in 192128, one of the most extraordinary Indian summers in all of music. Its importance in his output is unique.
Illustration: first edition of vocal score (1908), front wrapper, Brno: Klub přátel umění
Recommended recordings
Several of the most important recordings (including Charles Mackerrass 1982 Decca account, Frantiek Jíleks 1978 Supraphon recording with an all-Czech cast, and a stunning live performance from Munich under Kubelík featuring Astrid Varnay as the Kostelnička) are currently out of the catalogue. However, the following deserve a place on any opera lovers shelves:

Jelinková, Krásová, Blachut, ídek, Prague NT / Vogel (1953)  SU33312
- The first complete commercial recording of a Janáček opera, with a vintage Prague cast under a conductor who was an authority on the composer in his own right; a mono recording of the Kovařovic version, this nevertheless has a dramatic flow and urgency that put it in a class of its own; Krásovás Kostelnička and Blachuts sweet-toned Laca clinch its place as one of our favourites

J Watson, Barstow, Robson, Wedd, WNO / Mackerras (2003)  CHAN31062
- Mackerrass second commercial recording of the opera, sung in English, features an accomplished cast headed by Janice Watson, Josephine Barstow and Nigel Robson; this represents a more complete picture of the 1908 Brno version than Mackerrass Vienna recording for Decca, while recapturing much of its excitement

G James, Vermillion, Briscein, Reinhard, Oper Graz / Kaftan (2014)  OC962
- For those wanting the opera in Czech and in good modern sound, this live recording has many attractions, a palpable stage feel, the 1908 text and even one restored passage from the 1904 score (give yourself a pat on the back if you spot it!)

Jiri Zahradka, Truth, the first thing is truth, not beauty: The Story of Janáčeks Jenůfa (Brno: Moravské zemské museum, 2021)
- An opulent hardback book with parallel Czech and English text, superbly written by the leading Czech Janáček expert, rich in background and detail about the opera, its composition and early performance history; lavishly illustrated with rare documents and photographs, many in colour

These days, genre looms large in the music world. Its an affliction that looms large in the world of popular music, with various new types of pop and rock music emerging on an almost annual basis. In classical music, the situation appears to be more stable, at least on first appearances. The venerable Gramophone magazine has for many years divided its reviews into orchestral, chamber, instrumental (just one player), vocal (anything sung that isnt opera) and opera, with a separate section for Jazz & World Music. Other... read more