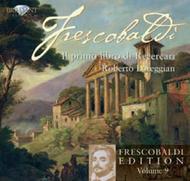 A new instalment in the prestigious Frescobaldi Edition.

Girolamo Frescobaldi (1583-1643) is the most significant figure in Italian keyboard music before Domenico Scarlatti. He was born in the northern city of Ferrara which, under the Este family had become a major centre for the musical avant-garde. Frescobaldi thrived in this heady environment and this, together with the influences he had picked up from his travels to Rome and Flanders, gave his music its distinctive style. He became organist at St Peters in Rome, and when the new St Peters was completed in 1615 it was equipped with two superb organs, which Frescobaldi performed on during official services and state events.

Roberto Loreggian is one of the foremost interpreters of Frescobaldi, having won the highest critical praise for his earlier recordings in this series.

The ten Recercari on this CD were published in 1615. The word recercare means to search, or tease out. Musically it describes a work in which a short abstract theme, or motif, is manipulated through imitation, inversion and so on. In this recording, each recercare is preceded by a toccata taken from a manuscript copied for the wealthy Fugger family of Augsberg. Whilst not from Frescobaldis 1615 set of Toccatas, they do show many of his fingerprints.

Roberto Loreggian plays an anonymous 18th-century organ in the church of the Annunciation of the B.V.M., Casatico di Marcaria (MN), restored in 2005 by Marco Fratti.