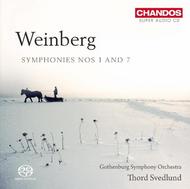 The Chandos series of Weinberg orchestral works is proving a benchmark series, and contributed significantly to his reappraisal. The most recent album by the Gothenberg forces (CHSA5064) was described as 'one of the most exciting discs to come my way in a long time A release of the first importance (International Record Review)

Weinbergs music is full of orchestral colour and rhythmic energy. Shostakovich was his most important influence, and a close friend, describing him as one of the most outstanding composers of the present day. His music is reminiscent of Shostakovichs, but with strong elements of Jewish folk music and klezmer.

Weinberg composed his First Symphony, a full-scale, four-movement work in G minor in 1942, in Tashkent, the capital of Uzbekistan.  He had been driven from Warsaw by the Nazi invasion in 1939 and found refuge in Minsk. When the Nazis invaded the Soviet Union he had to flee again, this time by train via Moscow to Tashkent, where large numbers of the Russian artistic intelligentsia joined him in evacuation. Those he met there included the woman who was to become Weinbergs first wife, Nataliya Vovsi-Mikhoels, daughter of one the most famous Russian-Jewish actors, Solomon Mikhoels.

Throughout his life Weinberg understandably considered the Soviet Union his salvation, and it should come as no surprise that his First Symphony is dedicated to the Red Army, at the time of composition locked in deadly combat with the aggressors who were ravaging both his homeland and his adoptive country.

Symphony No.1 is coupled with the later Seventh Symphony, composed in 1964 for harpsichord and strings. By 1964 Weinberg had truly settled in the Soviet Union, and his work is much more settled as a result. The work conveys certain piquancy for its use of harpsichord work and was premiered by and dedicated to Rudolf Barshai.

In this, the fifth album of the series, Thord Svedlund, a passionate devotee of Weinberg, conducts the Gothenburg Symphony Orchestra.