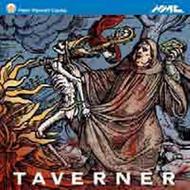 This release is of the landmark 1997 BBC recording of Taverner, featuring an astonishing line up of the cream of British contemporary music interpreters, alongside specialist period instrument ensembles Fretwork and His Majestys Sagbutts & Cornetts, conducted by Oliver Knussen.

Although what is now known about the 16th-century English composer John Taverner differs considerably from the plot of this opera, the piece is both a fascinating study of an artist as a man for all seasons and an extraordinary indictment of the horrors inflicted on humanity by religion, or religious zealotry.

The Taverner of the opera abandons music to become a persecutor of the Catholic faith and thus betrays all that is good in himself. In Act 1 we see him being tried for heresy by the White Abbot and pardoned by the Cardinal (Wolsey) because of his music. In Act 2, which is a parody of the first, Taverner is trying the White Abbot, who is burned at the stake. That is the bare outline. A sub-plot is Henry VIIIs wish for a break with Rome in order to divorce Catherine of Aragon and the machinations of a Jester, otherwise Death, who controls Taverners fate.