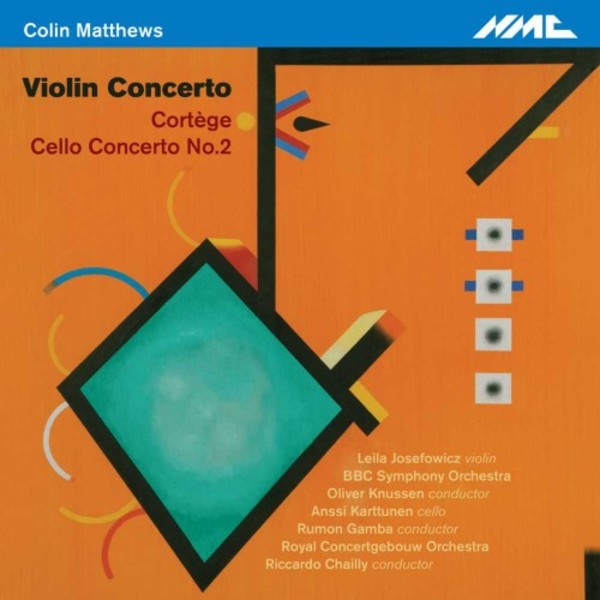 Over four decades Colins output of over 130 works has ranged from solo piano music through five string quartets and many ensemble and orchestral works. This album showcases three of his large-scale orchestral pieces; the dark, Mahlerian Cortège (1988) being the earliest work recorded here. Matthewss Violin Concerto (2009) was composed for Leila Josefowicz and Colin says it emerged naturally from her musical personality, style and technique. Matthewss Cello Concerto no.2 (1996) was composed for Mstislav Rostropovich, who gave its first performance with the London Symphony Orchestra and Sir Colin Davis at the Barbican, London, on 17 September 1996.

Three great works, then, to celebrate the three-score-and-ten of a remarkable musical polymath.

Cortège ... somewhere between Mahler and Birtwistle at his grittiest ... Its tremendous climax is given shuddering conviction by the Concertgebouw under Riccardo Chailly.  Helen Wallace
BBC Music Magazine July 2016

Such is Colin Matthewss influence on UK music, as composer, arranger, teacher and catalyst, that it would have been impossible for the record label he founded to ignore his 70th birthday this year. This disc leads with his Violin Concerto as performed by Leila Josefowicz and the BBCSO under Oliver Knussen at the 2010 Proms; Josefowicz, for whom Matthews tailored the work, soars high above the orchestra as if on a thermal. This supple, lyrical concerto is balanced with two of Matthewss more characteristically time-stretching scores. The 1996 Cello Concerto No 2, with Anssi Karttunen as soloist, is arresting if not as immediately engaging, and the clouds clear at the beginning of its final movement in a passage of rapt meditation. In between, comes Cortège, written in 1988. Recorded by the Concertgebouw under Riccardo Chailly, its sombre but driven  monumental, yes, but one somehow feels inside the monument rather than gazing on it.  Erica Jeal
The Guardian 24 June 2016