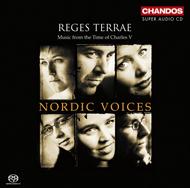 Reges Terrae: Music from the Time of Charles V

Nordic Voices is a six-voice 'a cappella' group blending solo and ensemble qualities: performing with idiomatic style and great rhythmic liveliness, the members employ a playful yet sophisticated approach that highlights their remarkable vocal abilities. They have received glowing commentary on their concert performances, and for their inaugural release on Chandos have put together a unique collection of pieces by sixteenth-century composers associated with the courts of Emperor Charles V, a great musical enthusiast. Superbly sung by these Norwegians, the works draw attention to a highly varied group of sought-after composers, whose careers often followed a colourful course.
During the first half of the sixteenth century, there was no greater a ruler than the Emperor Charles V, whose court was lavishly supplied with music by composers of high talent. Charles had a personal enthusiasm for music, and his chapel was more or less in constant attendance on his travels. It is small wonder, then, that a number of the greatest composers of the age had some connection with him, including the Franco-Flemish composers Manchicourt, Cristóbal de Morales and Nicolas Gombert.
Complementing these composers are the perhaps less well-known Guerrero and Jacobus Clemens non Papa. As members of the chapel choir of Charles V, most of these composers travelled the Empire widely, and were praised as among the outstanding masters of their time. Only Francisco Guerrero worked exclusively in Spain. To us the least well known of the Spanish composers of the period, and consequently the most underrated, he was the most admired Spanish musician of the second half of the sixteenth century, known for his Latin liturgical works.
Manchicourt composed some of the most glorious music of the time, this CD including the well-known early motet O Virgo virginum along with the premiere recording of the Agnus Dei from the Missa Reges terrae. De Morales is widely recognised as the most important figure in early sixteenth-century Spanish music, garnering frequent praise from his contemporaries and ranking with Palestrina in his mastery of polyphony. Nordic Voices here present two of his sumptuous and richly varied motets.
This superb collection confirms these composers as major figures of their era, and will serve as a perfect introduction to the music of the period. It contains premiere recordings of works by Clemens non Papa and Pierre de Manchicourt.