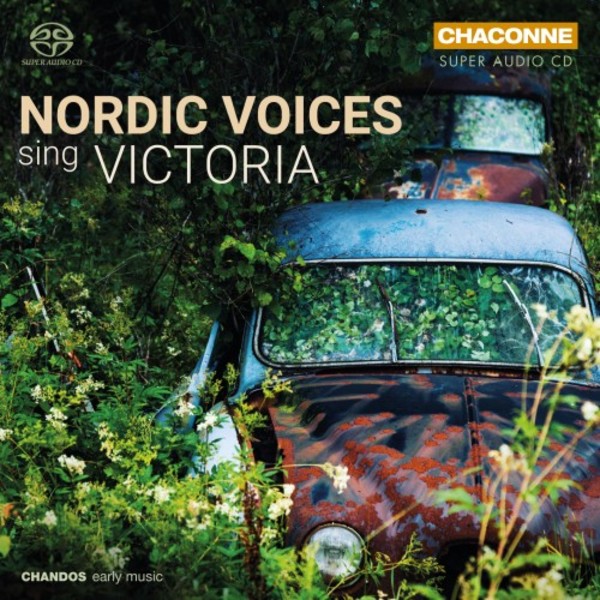 The Norwegian six-member a cappella group Nordic Voices here presents the extraordinary polyphonic music of Tomás Luis de Victoria, a Spanish composer whose music has continued to move people for more than 400 years, crossing geographical, cultural, and even religious barriers.

This surround-sound recording comes ten years after a warm, consistent and moving (BBC Music) album of Lamentations, which featured pieces by sixteenth-century composers, including Four Lessons by Victoria. Examples of the composers exceptional output, characterised by a careful setting of the text and an ability to control texture by a constant grouping and regrouping of different voices, here meet the artistic resourcefulness, versatility, technical precision, and freshness of the young ensemble.

Together with Palestrina and Lassus, Tomás Luis de Victoria (1548-1611) was one of the three great figures of the musical Counter-Reformation. Today he is best remembered for his mass settings, a superb Requiem and his Lamentations of Jeremiah, but his contemporaries valued most highly his fifty or so Latin-texted motets, ten of which feature on a new Chandos disc from the six-voice a cappella group Nordic Voices. The albums striking cover hints at the seeming incongruence of a Norwegian ensemble tackling the music of one of Spains greatest composers, but the gleamingly clear textures and flawless ensemble shed welcome light on some of Victorias most radiant works.

You get a flavour of this in the very opening number, the Christmas motet Quem vidistis, pastores, where the singers point up the Hispanic rhythms at the words collaudentes Dominum (praising the Lord), and throughout the disc rhythms are as wonderfully buoyant as the textures are brilliantly transparent. These are texts that were designed to complement the liturgy, and they provided Victoria with plenty of opportunity to indulge his gift for musical illustration, with such subtle devices as a descending melisma at the words portae inferi (gates of hell) in Tu es Petrus. The Nordic Voices are alive to all these instances, but they never allow them to get in the way of the overall expressive trajectory. From the richer textures of six-part scoring to such exquisite passages as the three-voice third section of Salve, Regina, the singers relish the delights of this music which, with just one voice per part, are illuminated as never before.

Even more than on the award-winning 10-disc Archiv box from Ensemble Plus Ultra, intonation is immaculate and vocal lines marvellously focused, with shimmering sopranos and a light-toned mezzo, and well-defined lower voices that never overpower. The overall musical design of the disc is attractive, too, with a generally more jubilant flavour the first half, and more reflective numbers in the second. Phrasing is consistently thoughtful without ever feeling micro-managed: try the opening of Nigra sum sed formosa to hear these singers at their most unassumingly affecting.

In addition to the ten motets, theres room for the hymn Vexilla Regis, sung in alternatim style, Hispanic plainchant (more hispano) alternating with three- and four-voice polyphony, before a burst of six-part radiance for the doxological final verse.

As an essential corrective to the widespread view of Victoria as a composer of majestic, plangent large-scale works, this delightful collection of motets could hardly be bettered. It captures all the sunlit disposition that Victorias contemporaries so admired, in a recording that enhances the bloom of these remarkable voices. With unusually engaging and informative notes from Victoria expert Soterraña Aguirre, this is an absolute peach of a disc, unhesitatingly recommended.