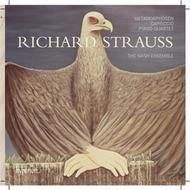 This is The Nash Ensemble at its very bestfull-blooded performances of red-meat chamber music.
Metamorphosen can in some ways be regarded as Richard Strausss heart-rending reaction against the wartime destruction of German culture and heritage. Completed in the spring of 1945, the work is at once angry, poignant and intensely beautiful. The version performed here is derived from Strausss original score for seven stringed instruments (he later expanded it to twenty-three), and incorporates the revisions to the closing bars made in subsequent versions.
The Piano Quartet is an early work, composed some sixty years before the valedictory Metamorphosen. In it, one contemporary critic noted, Strauss shows himself a better Brahmsian than Brahms. Strauss was clearly proud of this early compositionhe performed in the premiereand we should not dismiss it purely on the grounds of its coming from the pen of a twenty-one year old.
Capriccio also predates Metamorphosen, but only by four years. This last of Strausss ground-breaking operas opens with an extended movement for string sextetthis is no arrangementas the composer character Flamand competes with his poet rival for the hand of the delectable Madeleine. The result is of such searingly intense emotion that Strauss successfully granted the 1942 premiere to a hated Nazi official in return for safe passage out of Germany for his son and part-Jewish wife.