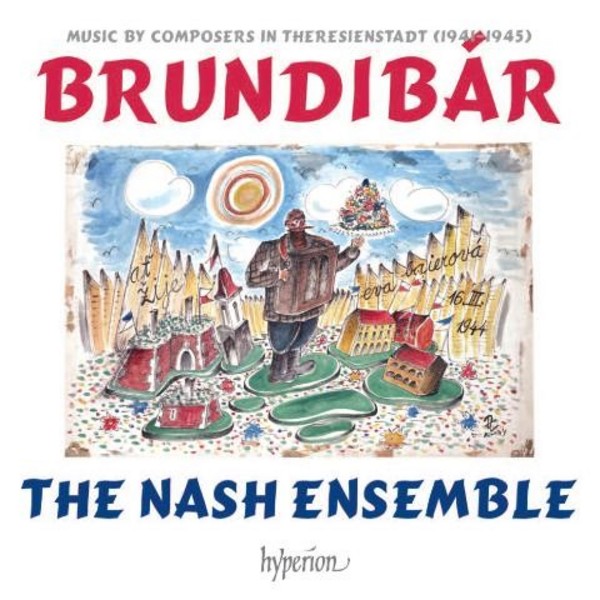 Brundibar: Music by composers in Theresienstadt

The Nash Ensemble presents a programme of works written at the transit camp Theresienstadt by four Jewish composers who went on to be killed at Auschwitz, their music forgotten. In recent years it has begun to be performed again and its extraordinary quality appreciated.

One of the most popular works was Hans Krásas enchanting childrens opera Brundibár, performed fifty five times at the camp and presented here as a suite arranged by the composer David Matthews.

Viktor Ullmann, whose chamber opera The Emperor of Atlantis is now frequently performed, is represented by his String Quartet No.3, a lyrical, sumptuous work with a wistful quality, influenced by the Second Viennese School.

Pavel Haas studied with Janácek and his vividly atmospheric String Quartet No.2, From the Monkey Mountains, shows the influence of his teacher, but also a definite musical personality.

The greatest musical experiences radically alter our perspectives. This was very much the case with The Nash Ensembles Theresienstadt weekend. Concerts, films, talks and exhibitions examined the extraordinary cultural flowering in the ghetto-camp near Prague, set up by the Nazis in 1941, where, among thousands of others, the Czech-Jewish intelligentsia were held before transportation to death camps. The events force lay in its broadening of our contextual awareness, and in its revelation of the quality of the work produced  many works were outright masterpieces  the Nash, an ensemble of stars, played with great technical power and depth of feeling  the Nash should tour this internationallyit deserves to be heard around the world. (The Guardian)

Their dates make sobering reading: Pavel Haas (18991944), Gideon Klein (19191945), Hans Krása (18991944), Viktor Ullmann (18981944). All four belonged to that lost generation of Czech Jews who perished in the Nazi gas chambers centred on the Auschwitz extermination camp. Before their transfer to the death camps on 16 October 1944, they were held at the Theresienstadt (Terezín) ghetto in northern Bohemia. Originally an Austro-Hungarian garrison town built for a population of 6000, in the early 1940s Terezín was turned into a Jewish ghetto (effectively a concentration camp) where up to 60,000 people at a time were crammed in appalling living conditions.

The vibrancy of musical life in these terrible circumstances is one of the most extraordinary stories of World War II. Musical life was, ironically, freer than anywhere else in Nazi-occupied Europe and, despite the extreme physical deprivations, music blossomed in the most unexpected ways. One of these was Hans Krásas childrens opera Brundibár (Bumblebee) to a libretto by Adolf Hoffmeister. It was actually composed for a competition in 1938, and tells the story of the adventures of two young children and the triumph of Good over Evil. In Theresienstadt it proved hugely popular with audiences, performed fifty-five times, its score full of catchy and hummable tunes at various points redolent of Weill and the Stravinsky of Petrushka. It also featured in the notorious Nazi propaganda film, Der Führer schenkt den Juden eine Stadt, which painted an almost wholly false picture of life in the ghetto just four months before these composers were sent to Auschwitz. A suite from Brundibár was devised in the 1990s by Petr Pokorný, and it is performed here in a highly successful reduced orchestration by David Matthews specially commissioned by The Nash Ensemble, lending its title to the disc as a whole.

The other works on this new recording testify to the flowering of chamber music inside Theresienstadt. Viktor Ullmanns Third String Quartet was composed in Theresienstadt in 1943. Cast in four movements which run continuously, it is an enormously accomplished and lyrically chromatic work which hints at Ullmanns Viennese studies with Schoenberg as well as his Prague associations with Zemlinsky. Gideon Kleins String Trio, one of his last works, was finished just nine days before the young composers transport to Auschwitz. There are clear references to Kleins Moravian roots, not least in the wistful folksong variations of the slow movement. Once again, we are painfully reminded of the huge talent that was lost to music in the death camps.

Pavel Haas was born in Brno, and became one of Leo Janáčeks most original pupils. His Second String Quartet, dating from 1925, is one of his most inventive compositions. Subtitled From the Monkey Mountains after an area of the Moravian highlands, it is cast in four movements each of which has a descriptive title. The scherzo-like second movement (Coach, Coachman and Horse) starts with entertainingly awkward glissandi, before building to a galloping conclusion, whilst in the finale (Wild Night) the four stringed instruments are joined in by a jazz-style percussionist.

These performances by The Nash Ensemble are remarkably successful: fresh and alert, but sensitive also to the musics spiritual and emotional undertow. Special mention should be made of the string players who provide the backbone of the recording: violinists Stephanie Gonley and Laura Samuel, viola player Lawrence Power and cellist Paul Watkins. They are certainly the equal of such established quartets as the award-winning Pavel Haas Quartet who have also recorded this repertoire.

In fact, this present disc, simultaneously fascinating and poignant, makes both an ideal introduction to the music of Terezín for those not yet familiar with its extraordinary riches, and also a substantial addition to the existing discography. Very strongly recommended!