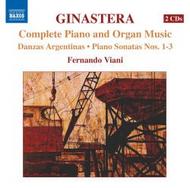 The Argentine composer Alberto Ginastera is widely regarded as one of the most important and original South American composers of the 20th century.
CD 1 of this 2-CD set of the complete works for organ and piano focuses on early works, many of which use folk-based elements without merely transcribing traditional tunes, and with increasing sophistication.
The large-scale piano works featured on CD 2 include Sonata No. 1, Op. 22 (1952), one of the composers most popular works, and the Sonata No. 3 (1982), Ginasteras last work, described by the soloist on this recording as a single grand and violent impulse, with no time to catch its breath, like a dance to try and escape from death. Variazioni e Toccata for organ is a highly virtuosic work, comprising twelve variations and a toccata based on a fragment of a fifth-century Easter hymn.
This disc contains several world première recordings.
CD 1: Dances, Pieces, Suites, Preludes, Transcriptions
CD 2: Sonatas for Piano and Organ Works