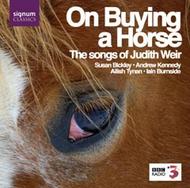 On Buying a Horse - The Songs of Judith Weir

Iain Burnside's broadcasting career covers both Radio and TV. As presenter of BBC Radio 3's Voices programme, he has recently been honoured with a Sony Radio Award. Here he has plotted a representative programme by one of Britain's leading contemporary composers, aided and abetted by two rising stars and one consummate exponent of her art.
Susan Bickley is firmly established as one of the most versatile mezzo-sopranos, equally at home in the opera house or the concert platform, but starry in contemporary music.
In 2003 Ailish Tynan represented Ireland in the BBC Singer of the World Competition, winning the BBC Singer of the World Rosenblatt Recital Prize and also became a BBC New Generation Artist. Ailish was also a member of the former Vilar Young Artist Programme at Covent Garden.
Andrew Kennedy studied at King's College, Cambridge, and the RCM. He was on the Young Artists Programme at Covent Garden and won the BBC Singer of the World Rosenblatt Recital Prize in 2005. He also won the 2006 Royal Philharmonic Society's Young Artists' Award.