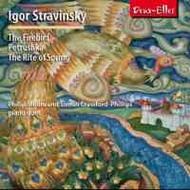 This exciting new disc finds the piano duo energising a trilogy of Diaghilev ballets by Igor Stravinsky.
Stravinsky composed his ballets at the piano and used 4-hands piano versions to rehearse the productions so naturally, the orchestral drama translates into pianistic drama with great effect.
With no Stravinsky four-hand transcription of Firebird available, Philip Moore undertook the project of arranging the work for 4 hands and produced a spirited and chamber music like version of The Firebird, recorded here for the first time.
Philip Moore and Simon Crawford-Phillips have been performing as a piano duo since 1995 and have won numerous awards.   In 2001, they made their Proms debut to critical acclaim with a performance of Stravinskys Concerto for Two Pianos which was hailed by The Daily Telegraph as a real shot of adrenalin.