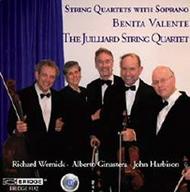 This disc of three major 20th century works for voice and string quartet marks the final recording by the distinguished soprano Benita Valente before her retirement from the concert stage.
All three works were given their premiere performances by Benita Valente and the Juilliard String Quartet. Richard Wernicks String Quartet No. 5, in four movements, is dedicated to the memory of the Israeli premier Yitzhak Rabin, assassinated in 1995 by an extreme Zionist nationalist at a moment when the peace process between Israelis and Palestinians appeared to have established momentum towards a positive outcome. This quartet, setting two poems by the young Hungarian poet Hannah Senesh (1921-44), is Wernicks immediate and heartfelt response to the tragic event.
Born in Buenos Aires of a Catalan father and an Italian mother, Alberto Ginastera became the most significant figure in Argentine music during the 20th century. His Third String Quartet was his last, and it is a work which makes tremendous demands upon the performers. The string techniques include aleatoric, microtonal and noise elements, while the soprano part, which includes settings of poems by Lorca, Juan Ramón Jiménez and Rafael Alberti, assumes many dramatic roles.
John Harbisons The Rewaking is a passionate setting of four late poems by William Carlos Williams. Including numerous instrumental interludes and transcription of bird song, The Rewaking, in the words of the composer, deals with the theme of rewaking from a winter of the spirit.