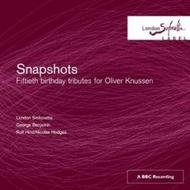 only two notes for olly (the other five for later)

Olly on the Shore

Light the First Light of Evening

I suppose a Fugue is out of the Question

only two notes for olly (the other five for later)

Olly on the Shore

Light the First Light of Evening

I suppose a Fugue is out of the Question

The new London Sinfonietta Label was launched in 2004 with a CD of tributes written for Oliver Knussens fiftieth birthday celebrations by a selection of his admirers and friends. The thirteen tracks on 'Snapshots' are world premiere recordings of London Sinfonietta/Royal Festival Hall co-commissions and birthday gifts from composers from around the world, recorded live at the Queen Elizabeth Hall.
All works were recorded live at Oliver Knussens 50th birthday concerts on 12 June 2002 by BBC Radio 3.
a joyful disc, ebulliently performed. With the arrival of the London Sinfonietta label, the world has suddenly become a better place. The Times
All are dazzingly well played by the Sinfonietta and pianists Nicolas Hodges and Rolf Hind, and with a roster of composers headed by Elliott Carter but also including Detlev Glanert, George Benjamin, Julian Anderson, almost every one of these 13 pieces is a gem. The Guardian