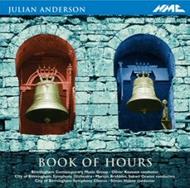 NMC is proud to announce the release of this disc devoted to the music of Julian Anderson, one of Britains brightest composing talents. The release celebrates the composers association with CBSO and its related ensembles, from 2001 to 2005.
Book of Hours, one of two live recordings on the disc (the other being Symphony) won the 2006 Royal Philharmonic Society Award for Large-Scale Composition. For ensemble and electronics, the citation from the jury praised its fusion of direct simplicity and delirious complexity a major breakthrough for Anderson.
The musical language of Andersons Symphony similarly takes in extremes of consonance and dissonance, and is Andersons only work to date to carry an abstract title.  Eden is the last piece the composer wrote for the CBSO as part of his residency and was written for conductor Martyn Brabbins to conduct at his first Cheltenham Festival in 2005. The work is a natural coupling providing contrast with the more exuberant Imagind Corners.
This disc is completed by the choral work Four American Choruses, which uses nineteenth-century hymns also heard in the music of Charles Ives.