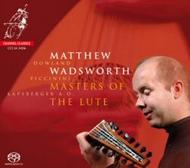 Masters of the Lute

Matthew Wadsworth, lutenist, is in great demand as a soloist, continuo player and chamber musician. He has been made an Associate of the Royal Academy of Music and was nominated by The Independent as a Rising Star for 2005. He is also Musical Ambassador for Britains National Talking Newspapers and Magazines.
Matthew Wadsworths previous CD, '14 Silver Strings' received a Gramophone Editors Choice.
'Masters of the Lute' is an anthology of lute and theorbo pieces from late Renaissance - beauty of harmony, balance and an eloquent regard for structure - till early Baroque, when composers developed a taste for personal expression and theatrical rhetoric.