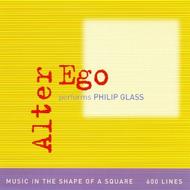 600 Lines, for ensemble
Gradus, for bass clarinet
How Now
Music in Contrary Motion
Music in Similar Motion
Piece in the Shape of a Square, for two flutes
Strung Out, for amplified violin

600 Lines, for ensemble
Gradus, for bass clarinet
How Now
Music in Contrary Motion
Music in Similar Motion
Piece in the Shape of a Square, for two flutes
Strung Out, for amplified violin

Four world premiere recordings are included on this disc, among them 600 Lines and How Now which were the first works composed for the Philip Glass Ensemble when it was founded in 1968.
During the 1960s and 70s Philip Glass established himself as a leading artistic voice by creating a new musical language in the downtown loft spaces of New Yorks Soho district.  Forty years later, Glasss early revolutionary music continues to appeal to younger generations as evidenced by Orange Mountain Musics latest release, 'Alter Ego performs Philip Glass'.
In 2006 the Italian new music ensemble Alter Ego marked its 15th anniversary as an ensemble.  Across Europe they are widely recognized as pioneers of new and experimental music.   On this 2-disc set, the group performs seminal Glass works including four world premiere recordings.  The featured pieces  all requiring a phenomenal degree of virtuosity - are How Now (1968), 600 Lines (1968), Music in the Shape of a Square (1968), Gradus (1968), Music in Similar Motion (a cult piece from 1969), Strung Out (1967) and Music in Contrary Motion (1969)  with a total length of over 135 minutes music.