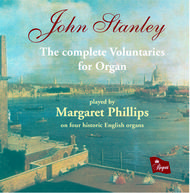 'Margaret Phillips plays sensitively and musically.her sense of touch and articulation is spot on, as is her sense of the projection of a musical line. I can thoroughly recommend this double CD not just to organists, but to all music lovers. Buy lots, and send copies to your friends.' - Early Music Review (August 2004)

...captures the spirit of the eighteenth century marvellously...a must - The Organ (August 2004)

Magnificently recorded releases. Played with such panache and colour by Margaret Phillips. 150 minutes worth of fascinating music.' - Birmingham Post (July 2004)

Regarded as one of Britains most outstanding concert organists and teachers, Margaret Phillips made her début at the Royal Festival Hall and soon gained an international reputation as a soloist, playing throughout Europe and in the USA, Canada, Australia and Mexico. Alongside her busy concert career, she was a member of the Council of the Royal College of Organists for 20 years, and President of the Incorporated Association of Organists from 199799. Since 1996 she has been Professor of Organ at the Royal College of Music in London.

Margaret Phillips regularly gives masterclasses both at home and abroad, and has been a jury member for organ competitions such as those held in St Albans (UK) and Odense (Denmark). She has made a number of critically acclaimed recordings.

In 1994, Margaret Phillips and her husband David Hunt founded the English Organ School & Museum in a disused chapel in Milborne Port, Somerset, where they have a collection of organs by English organ builders from the eighteenth century to the present day.