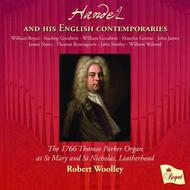 Handel and his English Contemporaries

Voluntaries (10) for the organ or harpsichord

Voluntary in A minor

Voluntary II in G major
Voluntary X in A minor

Voluntaries (10) for the organ or harpsichord

Voluntary in A minor

Voluntary II in G major
Voluntary X in A minor

A selection of organ music by Handel and his English contemporaries, played by internationally-respected early keyboard artist Robert Woolley, in his first recording on the Regent label.

Robert Woolley plays on the 1766 Thomas Parker organ in the church of St Mary and St Nicholas, Leatherhead. This instrument was reconstructed from original casework and pipework by the organ builders Goetze & Gwynn in 2007, and is a very rare example of organs from this period in England. This is the first recording of this delightful eighteenth-century instrument.

Robert Woolley is one of Europe's leading performers and teachers of the harpsichord and other early keyboard instruments. He studied at the Royal College of Music ,where he is now Professor of Harpsichord and Clavichord, and was Director of the Early Music Department and Adviser for Early Music from 1985-2006.

He is well known as a soloist, chamber musician, and orchestral player on the harpsichord, organ and fortepiano. His solo recordings include discs of music by Tallis, Byrd, Gibbons, Frescobaldi, Weckmann, Bohm, Handel, J S Bach, Scarlatti, Seixas and J C Bach for EMI, Virgin, Archiv, Hyperion and Chandos.