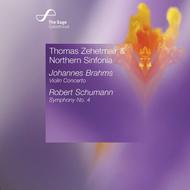 This is the second in an ongoing series of recordings made at the spectacular Sage Gateshead with Northern Sinfonia, inaugurated last autumn with the Gramophone Editors Choice release of Mozart Piano Concertos Nos. 9 and 23 (AV 2100), with Imogen Cooper directing from the keyboard.

Critical acclaim for Thomas Zehetmair and the Northern Sinfonia:
as soloist in Brahms Violin Concerto, [Zehetmair] gave as fine a performance as I can remember  and he was conducting, too.  The Independent

an exceptional performance  bold, intensely lyrical, yet of an almost chamber music-like intimacy.  The Guardian

All the musics devilment, daring and sheer difficulty were reborn in a performance taut with tension, and wonderfully variegated in tint and tone.  The Times

a reminder that there are states of being into which only music can lead you: that blissfulness where time transcends itself; that mountain-top freshness were everything makes sense."  The Sunday Times