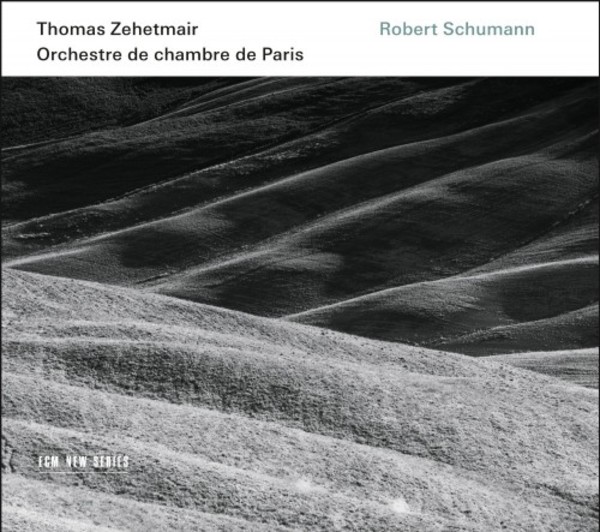 Founded in 1978, the Orchestre de chambre de Paris quickly established its reputation as one of Europes leading chamber orchestras and it makes its ECM debut here with Thomas Zehetmair.

In 2012, Thomas Zehetmair was appointed the orchestras principal conductor and artistic advisor and on this recording, made at the Théâtre des Champs-Elysées in February 2014, does double duty as both soloist and conductor. Zehetmairs insightful approach to Robert Schumann has already been demonstrated on ECM New Series with the Zehetmair Quartet, whose recording of the Schumann string quartets (4721692) won many prizes including the Gramophone Award as Album of the Year in 2003.

Here the Orchestre de chambre de Paris plays the Symphony No.1 Spring (1841) and the Phantasie for Violin and Orchestra and the Violin Concerto (both 1853). The composition of the First Symphony drew inspiration from Schuberts Ninth Symphony and from the poetry of Adolf Böttger. The Phantasie and the Violin Concerto had quite different fates. The Phantasie was premiered to huge acclaim after initial performances. The Violin Concerto had to wait more than 80 years for its premiere, and too often since then players have made adjustments to the violin part. Thomas Zehetmair reveals how urgent and convincing the impact of Schumanns original version can be when the performers enter into its spirit.

Schumanns Violin Concerto has a tricky history. It was composed in 1853 but deemed so weird at the time that it wasnt performed until 1937, when it was hijacked for Nazi propaganda. Nowadays, advocates such as Thomas Zehetmair give the troubled and soulful piece the love it deserves. He first recorded it for Teldec in 1988 and recently helped prepare a new urtext edition  sorting out centuries of editorial meddling. His new account is warmer, more declamatory, more openly glorious in lyrical passages. Zehetmair is both soloist and conductor, and whats fascinating is how he tells one story with his violin  passionate and resolute  while letting the orchestra hint at darker things. Listen to the crippling self-doubt revealed when the first movement suddenly dies away, for example.  Kate Molleson
The Guardian 25 March 2016