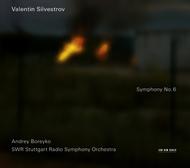 Alfred Schnittke and Arvo Pärt have both called the Ukrainian Valentin Silvestrov one of the greatest composers of our time and hes certainly a true original. He was one of the first composers from the former Soviet Union to cast aside what might be called the "conventional" gestures of the avant-garde, as well as any sense of formulaic "experimentalism". As he has perceptively noted, "the most important lesson of the avant-garde was to be free of all preconceived ideas  particularly those of the avant-garde." This perspective led to the development of an idiom which Silvestrov would eventually come to call "metaphorical style" or "meta-music".

The Symphony No 6 offers an impressive synthesis of Silvestrovs personal style of Metamusik": music beyond music, sounds, often verging on silence, eavesdropping on long-lost reverberations. Written in 1994-95 and given a final revision in 2000, it concludes a series of great orchestral works he composed during the 1980s and 90s.  Its a defining five-part work stretching over 55 minutes and is visably patterned on a late-romantic symphony. Its central slow movement  the symphonys lyrical climax  recalls the adagietto of Mahlers Fifth Symphony. Silvestrovs uniquely poetic and dreamlike music is played here with luminosity by the Stuttgart Radio Symphony Orchestra under the baton of Andrey Boryeko.

Praise for other Silvestrov recordings on ECM New Series:

(Metamusik/Postludium) : There is no doubting the qualities of imagination and the richness of invention... The scoring is wonderfully rich and heavy. The post-Scriabinesque moments are offset by the occasional dreamlike hints of Mahlerian warmth. An undeniably powerful vision... Do investigate this.  - International Record Review

(Requiem for Larissa) :  The fervour of its melancholy lament is extraordinary  One of the most affecting and momentous of modern Requiems. - BBC Music Magazine (CD of the Month),  Totally gripping. - Choir and Organ

(Misterioso) : Misterioso indeed. And it is not just Silvestrovs eponymous work that emanates that quality. His Violin Sonata, part of his obsession with a music composed as it were after the death of Music, shares its magical effect of an intense yet ungraspable beauty. Casts a powerful spell and deserves to be widely heard. - Gramophone