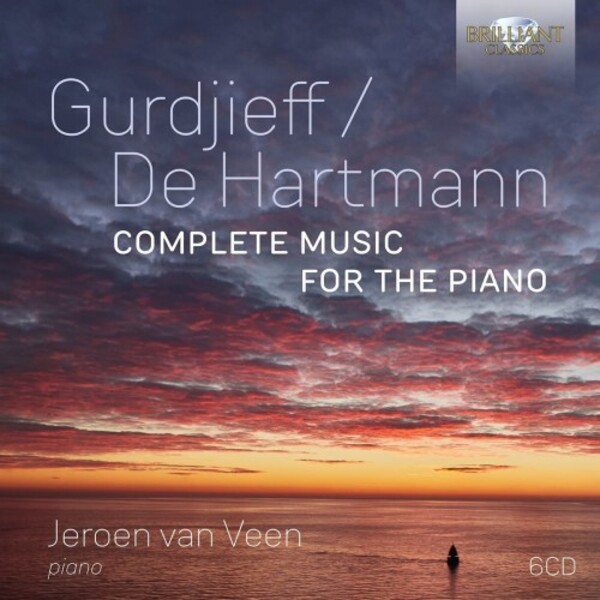 The most complete single collection of the Eastern-inflected hymns, songs and dances for piano composed jointly by a pair of mystic seekers after truth and notable forerunners of the Minimalist school of composers.

The Ukrainian composer Thomas De Hartmann (1885-1956) had undertaken a classic musical training with Anton Arensky and then Nikolai Taneyev before the death of his mother in 1912 prompted him to begin searching for a spiritual teacher. Four years later he made the encounter that would change his life, with the Armenian philosopher and mystic George Gurdjieff (1877-1949). Gurdjieff had his own musical training, as well as a sharp ear and retentive memory for the folk melodies which he heard on his long travels through central Asia and the middle East. De Hartmann and his wife joined Gurdjieffs circle of followers, and the two men began to write music to accompany their spiritual exercises.

This body of music eventually amounted to around 300 short pieces, of which the indefatigable Jeroen van Veen has recorded the entire published corpus of 170 divided into four volumes. During lockdown he found himself with the time to immerse himself in this music, which ranges across Asian, Arabic and European systems of rhythm, harmony and tuning, so that he could capture its perfumed mysticism and improvisational character.

There are solemn hymns of an Orthodox nobility, atmospheric tone poems such as the Night Procession, freely pianistic transcriptions of melodies from early-Christian sects such as the Essenes, modal-pentatonic melodies to accompany a Sacred Reading from the Koran and to aid an awakening of consciousness in an elevated state of awareness, and then pieces simply titled after their date of composition. While overall meditative in mood, there is a tremendous variety to the Gurdjieff/De Hartmann collection, and Jeroen van Veens new recording is an ideally comprehensive way to dive into its riches.

Van Veen is quite brilliant in the quirky fourth [Philip Glass Etude] and his reading of the exquisite, valedictory 20th is excellent.  Gramophone

Jeroen van Veens recording can stand alongside the best from any source, and this [Arvo Pärt] set is worthy of high praise in every regard.  MusicWeb International

Van Veen is a supremely eloquent performer of his own music. His touch is remarkably varied, carrying none of the hammered urgency of, for example, Michael Nymans performances of Nyman.  Fanfare