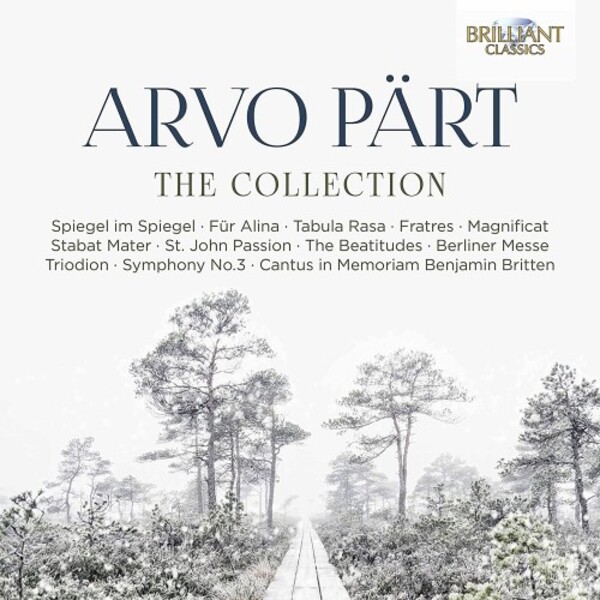 The most comprehensive collection ever issued of Arvo Pärts music, surveying the full range of an output from one of the most distinctive voices in late 20th-century music.

Subsequently and exhaustively imitated, the language of the Estonian composer Arvo Pärt is immediately recognisable, speaking with the still small voice of calm amid chaos and confusion. Born in 1935, Pärt reached compositional maturity in the late 60s with a series of works which painfully juxtaposed modernist dissonances with diatonic islands of peace, often Christian in message and raining down criticism from Soviet authorities.

At this point the evolution of his style produced an unassuming piano piece, Für Alina, which holds the key to the next 25 years of his music. For it he developed a tintinnabuli technique where melodies move step by step around a central pitch, producing a soundworld timeless yet original and distinctively new.

From the technique grew instant classics of a genre at one remove from the slick certainties of US minimalism: Fratres and its many arrangements (eight of them represented here), the Cantus in memory of Britten, Tabula rasa for a Baroque sized concerto grosso ensemble and more. Then, having emigrated to Germany, Pärt applied the technique to the Christian texts which were always his rock and inspiration: first the St John Passion in 1982, followed by a sheaf of vocal works such as the Magnificat, Stabat Mater and Maria Antiphons which have become standard repertoire for choirs around the world.

In the last 20 years the harmonies in his music have filled out and become accommodated to a Romantic richness of expression even in sacred works such as I am the true vine and The Woman with the Alabaster Box, but there remains an individual simplicity to Pärts idiom that resists easy classification while continuing to affirm beauty and touch the souls of listeners.

All the works mentioned here are included in the box, in widely praised modern recordings made during the last 20 years, and the set is accompanied by full booklet notes.

Beautiful performances his characteristic purity of sound [and] austere methodology are realised with great sensitivity by the Elora Singers.  Gramophone, November 2006 (Triodion and other choral music)

Highly impressive What makes the recording special is the full-throated sound of the choice I have no doubt that these performances would meet with [the composers] unqualified approval.  Gramophone, February 2016 (Berliner Messe etc.)