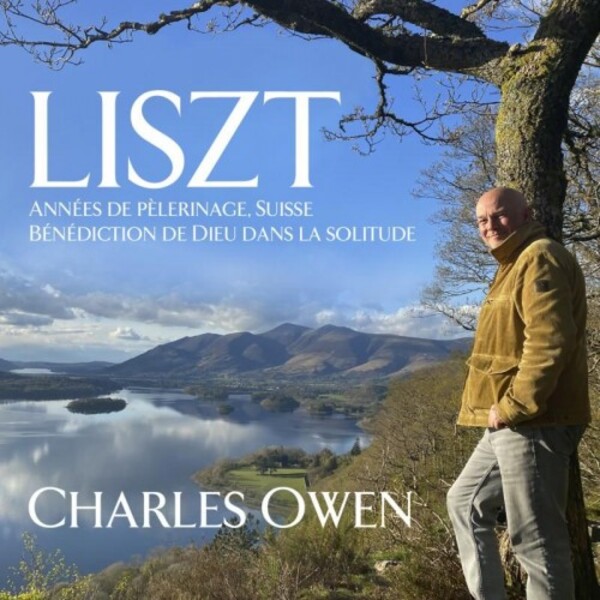 With his critically acclaimed AVIE Records recordings of music by Johann Sebastian Bach, Johannes Brahms, Gabriel Fauré and Sergei Rachmaninov to his credit, the celebrated British pianist Charles Owen scales the heights of Franz Liszt's anthology Années de pèlerinage, Première année: Suisse ("Years of Travel, First Year: Switzerland"), which evokes the great 19th-century pianist-composer's Swiss sojourns with aural impressions of the Alpine landscape, its peaks and valleys, mountains and streams, and the country's distinctive folk music. Literary references abound as they do in the album's concluding piece, the emotional Bénédiction de Dieu dans la solitude ("The Blessing of God in Solitude") which was inspired by a poem penned by Liszt's friend Alphonse de Lamartine. Emotions ran equally high for Charles Owen who turned to Liszt during lockdown. The uncertainty of being homebound throughout the pandemic was eased by the extra meaning and solace of the composer's evocations of journeying, experiencing the natural world and its sense of beauty and liberation.

Charles Owen enjoys an extensive international career performing a wide-ranging repertoire to outstanding critical acclaim. He appears at many major UK venues such as Wigmore Hall, Bridgewater Hall, The Sage & Kings Place. Internationally, he has performed at the Lincoln Center and Carnegie Hall in New York, the Brahms Saal in Vienna's Musikverein, the Paris Musée d'Orsay, and the Moscow Conservatoire. His chamber music partners include Julian Rachlin, Chloe Hanslip, Augustin Hadelich and Nicholas Daniel as well as the Vertavo and Takács Quartets.

A regular guest at UK festivals such as Aldeburgh, Bath, Cheltenham, Leicester and Ryedale, he has also performed in Australia at the Perth and Australian Festival of Chamber Music, Townsville. Charles's concerto appearances have included the Philharmonia, Hallé, Aurora and London Philharmonic orchestras. He has enjoyed collaborations with many leading conductors including Sir Mark Elder, Ryan Wigglesworth, Nicholas Collon and Martyn Brabbins.

Charles Owen is a Professor of Piano at the Guildhall School, Guest Professor at RWCMD, Co-Artistic Director of London Piano Festival and was appointed Steinway & Sons UK Ambassador in 2016.

"One of the finest British pianists of his generation" - Gramophone

"Charles Owen offers deep insight into Brahms' late piano music ... textures are miraculous, tempos perfectly judged; but his highest achievement is to make the listener forget there is a middleman. It is almost as if Brahms speaks directly to us." - International Piano CD of the Week, Brahms Late Piano Music, AV2397