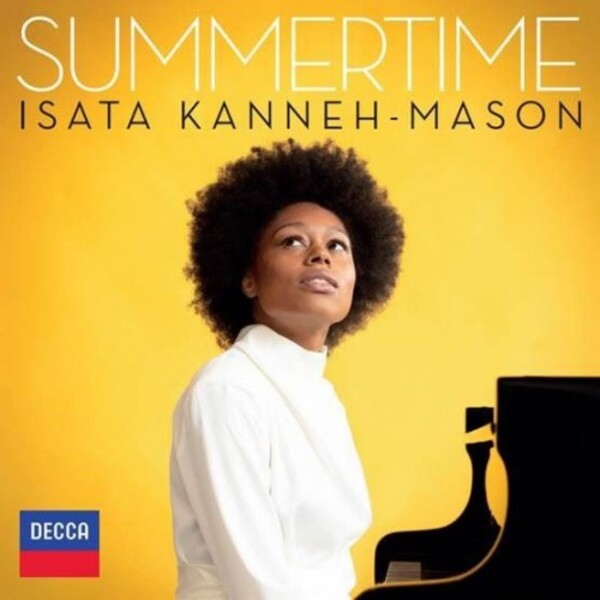 Impromptu no.2 in B minor
Negro Melodies (24)

The Cat and the Mouse: Scherzo humoristique

Fantasy on 'Porgy and Bess'

Impromptu no.2 in B minor
Negro Melodies (24)

The Cat and the Mouse: Scherzo humoristique

Fantasy on 'Porgy and Bess'

Summertime is the sparkling new album from vibrant young pianist Isata Kanneh-Mason. Isata brings her signature flair to this virtuosic and spiritual music for solo piano, following her 2019 award-winning debut album, Romance. It includes a world-premiere recording of a Samuel Coleridge-Taylor piece. .

Isata takes us on a personal journey through the vivid and spiritual musical landscape of 20th-century America, with a rich programme anchored around Samuel Barbers fierce Piano Sonata in E-flat minor, which received its premiere in 1949, performed by Vladimir Horowitz: one of Isatas great musical influences.

The album includes a world-premiere recording of Samuel Coleridge-Taylors Impromptu no.2 in B minor, released 110 years after it was originally published in London, and three of his transcriptions of American spirituals including Sometimes I Feel Like a Motherless Child. Coleridge-Taylor was inspired by traditional African-American music and sought to integrate it into the classical tradition in the same way as Brahms did with Hungarian folk music, Dvořák with Bohemian music, and Grieg with Norwegian. Coleridge-Taylor came to England from Sierra Leone, mirroring Isatas mothers heritage.
Earl Wilds dazzling arrangements of the music of George Gershwin  Summertime from his Grand Fantasy on Porgy & Bess plus I Got Rhythm, the sixth of his seven Virtuoso Etudes  sit alongside the composers own Three Preludes and Percy Graingers concert arrangement of Gershwins The Man I Love. Gershwins Three Preludes, published in 1926, epitomise his instantly recognisable classical-meets-jazz style, with bluesy harmonies and syncopated rhythms.

Continuing her quest to champion the music of female composers, Isata has recorded Amy Beachs tranquil By the Still Waters, an impressionist miniature first published in 1925.
I am delighted to be presenting my second solo album Summertime, which features a rich array of pieces from many of my favourite American classical composers. The Barber Piano Sonata forms the anchor around which the rest of the album was developed; I fell in love with the piece the first time I heard it, and its a real pleasure to have recorded it for Decca. I wanted this album to illustrate the diversity of music in America at that time, and so it was important to me to include the more familiar Gershwin songs, as well as the Samuel Coleridge-Taylor spirituals to which I feel a personal connection.  Isata Kanneh-Mason

Isata Kanneh-Mason is a born musician with a virtuoso technique. ... Kanneh-Mason opens with a magically atmospheric account of the Summertime section from Earl Wilds Fantasy on Porgy and Bess, followed by his firecracker étude on I got rhythm in which she comes as close as any to rivalling the American masters nonchalant dexterity. ... Summertime indeed, from a profound and greatly gifted artist who radiates warmth, joy and much-needed musical sunshine.  Jeremy Nicholas
Gramophone August 2021