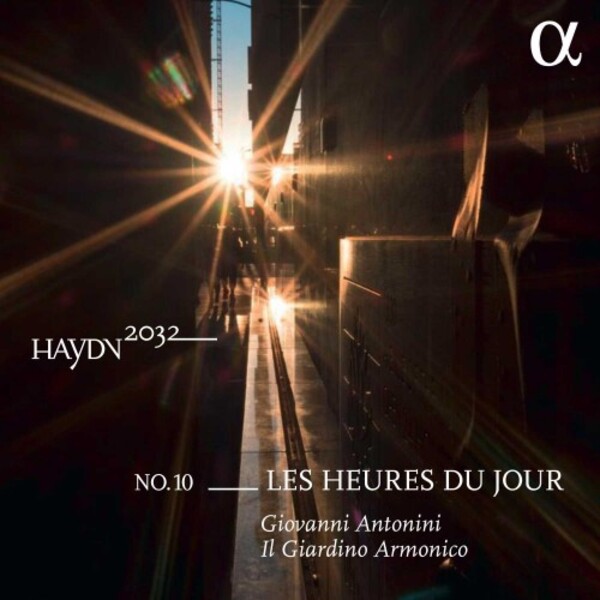 The HAYDN2032 edition celebrates the release of the tenth volume in the complete recording of Haydns 107 symphonies. Entitled The Times of Day, this programme is devoted to Symphonies nos. 6, 7 and 8, whose individual names translate as Morning, Noon and Evening. Prince Paul Anton Esterházy, who commissioned the work, is said to have wanted to show his guests that his orchestra was of excellent quality and that his Haydn was highly inventive. Giovanni Antoninis orchestra, Il Giardino Armonico, once again rises to the challenge!
This triptych following the suns course is prolonged into the night by the work of another composer: Mozarts Serenade in D major, nicknamed Serenata notturna, probably written for a masked ball at Salzburg Town Hall in February 1776.
Jérôme Sessini of the Magnum agency, who has won awards for his work on the cartel wars in Mexico and the opioid crisis in the United States, took the photographs featured in this volume.
As in the previous volumes, the orchestral playing is breathtaking in its accuracy -the sort of Haydn playing you dream ofthis may well become the period-instrument Haydn cycle by which all others are measured.  Gramophone

Haydn 2032  Giovanni Antoninis ambitious long-term project to record all of Haydns 107 symphonies in time for the 300th anniversary of the composers birth  reaches its tenth volume, roughly a third of the way through the journey. Employing two orchestras in alternation  Il Giardino Armonico and the Basel Chamber Orchestra  and in collaboration with the Joseph Haydn Foundation of Basel, the project has three distinctive features (apart from the vibrant musicality that seems to inform every bar): the works are grouped thematically rather than chronologically or numerically; they are paired with related pieces by other composers, mainly Haydns contemporaries; and the albums themselves include beautifully-presented work from photographers of the Magnum agency (founded in 1947 by, among others, Robert Capa and Henri Cartier-Bresson) which enhance and widen the themes of each album with striking contemporary parallels.

For this tenth volume the photographer is Jérôme Sessini, whose work captures times of day  mainly dawn, twilight and night  in some remarkable images from around the world that include an apparent hommage (in a mirrored form which Haydn would surely have appreciated) to Edward Hoppers famous 1942 painting Nighthawks. The times of day theme leads, for once, to a group of works actually conceived as a set: Symphonies 6, 7 and 8, known respectively as Le Matin (Morning), Le Midi (Midday) and Le Soir (Evening), or collectively in German as die Tageszeiten. Their low numbering is misleading, as Haydn had already composed some 14 symphonies during his employment by Count Morzin before these 1761 works  the first fruits of his next post, as vice-Kapellmeister to Prince Paul Anton Esterházy, marking the beginning of nearly 30 years of employment by the Esterházy family and one of the most important employer-composer relationships in musical history.

It was Prince Paul Antons idea that Haydn should compose a set of works based on the times of day, and among the family collection were many volumes of Vivaldi including The Four Seasons, which undoubtedly served as inspiration. Haydns conception, however, owes as much to Corellis concerti grossi, for all three works in the trilogy shine the spotlight on orchestral soloists: not just the famed leader of the Esterházy orchestra Luigi Tomasini, but also prominent concertante solos for cello, double bass (a particular favourite of Haydns) and wind players including the bassoon. This fusion of symphony and concerto grosso creates a remarkable soundworld for these pieces, and one that the players of Il Giardino Armonico, thoroughly immersed in the baroque and classical repertoires, clearly relish. The most obviously programmatic elements are the daybreak slow introduction to Symphony no.6 (which begins with a barely-whispered pianissimo on the violins before opening out gloriously in the following bars) and the vividly realised storm that forms the finale of Symphony no.8. Yet the playing throughout is so theatrically vibrant, bracing, and (in the slow movements) supple and sensitive that the listener is in a constant state of enchantment. Outer movements bustle with activity, with incisive articulation, slow movements blossom with radiance, while the Minuets, even at Antoninis brisk speeds, are full of character (try the trios of any of the symphonies for some unforgettable solos from double bass Giancarlo de Frenza).

Notwithstanding Haydns obvious debts to such predecessors as Vivaldi and Corelli in these works, there are also clear anticipations of the future: the daybreak looking forward to Haydns own Creation, the false entry of the horn at the same movements recapitulation which anticipates Beethovens Eroica, and the solo violins overtly operatic recitatives in the slow movement of no.7, marvellously realised here by Stefano Barneschi, which seem to foreshadow the instrumental recitatives in the same composers Choral Symphony. Wind playing throughout is wonderfully characterful (see Antoninis booklet note for some telling insights into the recapturing of period style in this regard), and the often challengingly high horn parts are met head-on by Johannes Hinterholzer and Edward Deskur on their natural instruments.

The coupling here is an imaginative and entirely apt one: Mozarts so-called Serenata notturna, probably composed for a carnival-time evening entertainment in February 1776, and which seems to inhabit a similar theatrical vein to Haydns trilogy. With its unique formal plan and orchestration  concertante and ripieno strings plus timpani but no wind  it creates a soundworld as fascinatingly individual as Haydns, and it is just as magically realised here, with timpanist Riccardo Balbinutti evidently enjoying every moment of his solos. It all adds up to yet another spellbinding disc in this magnificent series, sumptuously presented and recorded (right down to the ringing vibrations at the end of each work), and consistently absorbing and stylish.