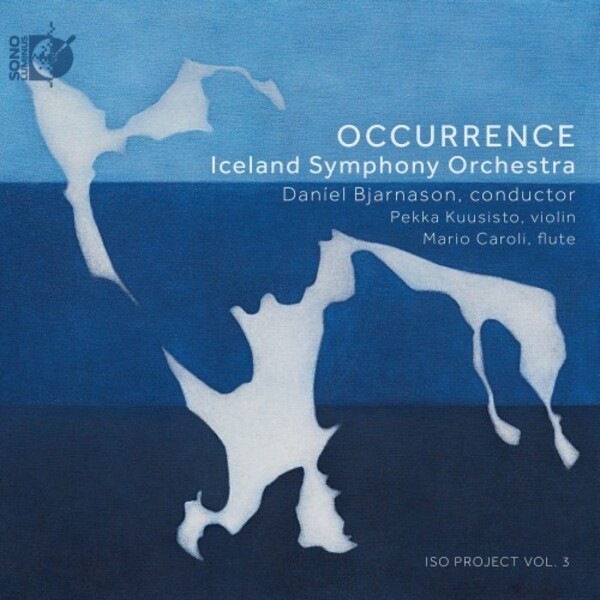 Occurrence is the third, and at least for now the last, in a hugely illuminating series devoted to works by contemporary Icelandic composers, as performed by Icelands 70-year-old national orchestra. Speaking for myself  and surely for many others, as well  the series has been a milestone project, one that any conscientious collector of symphonic music simply must have on the shelf. Across three CDs now, Sono Luminus has capitalized shrewdly on swelling global interest in the music of Daníel Bjarnason and Anna Thorvaldsdottir, using their works as a means by which to introduce seven more composers with original, substantial voices.

Three of the composers represented on Occurrence return from previous installments in the series. In addition to Bjarnson  who also has served as an insightful, sympathetic conductor throughout  we hear new works from Þuríður Jónsdóttir, whose Flow and Fusion opened the initial album, Recurrence, and from Haukur Tómasson, whose Piano Concerto no.2 was a highlight of the second release in the series, Concurrence.

These repeat engagements prove serendipitous, showing off fresh facets of these newly familiar creators. One, Bjarnasons own Violin Concerto, scarcely requires introduction, having proved its merits and attractions already on concert platforms around the globe since its 2017 world premiere at the Hollywood Bowl. Pekka Kuusisto, the violinist for whom the piece was written, demonstrates his consummate skill as a virtuoso, a collaborator and  not least  a whistler, and the orchestral accompaniment, no surprise, is vivid and alert.

Where in Flow and Fusion Þuríður Jónsdóttir fashioned an electronic component derived from sounds produced by orchestral instruments, in Flutter she invites the outside world in. Commissioned to create a piece marking the centenary of Olivier Messiaen, who famously incorporated birdsong into his music through transcription, Jónsdóttir accompanies solo flute and orchestra with sampled grasshoppers and cricketswho prove charming accompanists.

A similar continuity of technique and spirit applies in Tómassons In Seventh Heaven, which, like the previously heard piano concerto, eschews athletic display and histrionic gestures in favor of continuously shifting textures. The music, composed for the opening of Reykjaviks stunning Harpa Concert Hall, shimmers, glints, recedes, and jolts, transforming with the elemental unpredictability of light playing across Harpas dramatic crystalline exterior.

Each of the two newcomers to the ISO Project heard on Occurrence, Magnús Blöndal Jóhannsson and Veronique Vaka, reveals still further aspects of the ongoing story that is Icelandic music. Jóhannsson (1925-2005), a composer, pianist, conductor, and radio producer who completed his education at the Juilliard School, is viewed as Icelands first 12-tone composer, and among its electronic-music pioneers, as well. But in Adagio, composed in 1980 after a silence of nearly a decade, Jóhannsson abandoned his previous tools, embracing instead a melancholy lyricism all his own.

If Jóhannssons piece suggests that Icelandic music flourishes when a creator dispenses with imported techniques and idioms, Vakas Lendh offers proof that Iceland will gladly welcome a newcomer who arrives ready to embrace its spirit and custom. Vaka, a Canadian composer and cellist, completed her masters degree in Reykjavik, and then settled in southern Iceland. She based Lendh on her impressions of Krýsuvík, a gorgeously rugged geothermal area 35 kilometers away from the capital.

I have analysed the geologic and geographic features of the area, Vaka wrote in a program note that accompanied the works premiere in 2019, and transformed the landscape as I perceive it into musical notation. If the question of whether a country can be heard in the sound of its music is one that has run throughout the three volumes of The ISO Project, the precipitous contours and roiling energy of Lendh provide a potent affirmation.
 Steve Smith

The Iceland Symphony Orchestras three-disc survey of new orchestral music from its homeland has reached its end point and its easy to conclude that no country on earth has reinvented the language of the symphony orchestra on such distinctive and locally relevant terms as this one. ... an outstanding and historic series, one that affects the mind as much as the ears.  Andrew Mellor
Gramophone April 2021