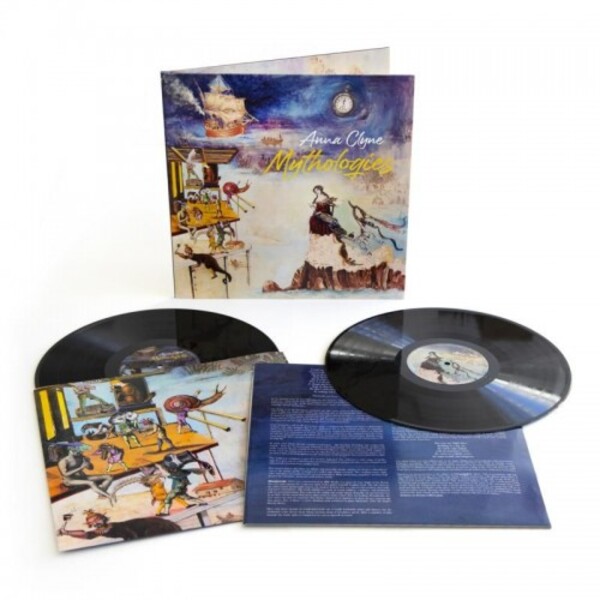 Anna Clyne: Mythologies became an instant media and popular success when it was released in October 2020 - hands-down one of the half-dozen best classical albums of 2020, according to New York Music Daily. The album is now presented in a magnificent 2-LP set, the splendour of the glossy gatefold and solid 180gsm vinyl an appropriate match for Annas enormous palette of colours and special effects.

Anna Clynes compositions balance striking originality with a comforting familiarity as she draws inspiration from historic styles and transforms them into a new musical dialect. Her background in electro-acoustic music and her fascination for a variety of multi-media - including poetry, visual art and videography - combine to create rich and exhilarating textures of popular appeal.

The five works on Anna Clyne: Mythologies were written over a 10-year period between 2005 and 2015. A kaleidoscopic orchestral showcase, the set opens with Masquerade. Commissioned by BBC Radio 3 to open the Last Night of the Proms in 2013 and conducted by Marin Alsop, this curtain-raiser captures the spirit of that quintessentially English tradition, evoking an 18th-century outdoor festivity featuring fireworks, acrobats and street entertainers.

Oramo also conducts The Seamstress, a single-movement violin concerto in all but name, featuring soloist Jennifer Koh as well as the whispered voice of Irene Buckley reciting the works inspiration, a poem by William Butler Yeats. More poetry by a Nobel laureate, the Irishman Seamus Heaney, inspired Night Ferry; conducted by Andrew Litton, the work conjures crashing waves and weathered seafaring. The set concludes with <<rewind<<, conducted by André de Ridder, a wild romp making reference to another vintage format, the VHS tape.