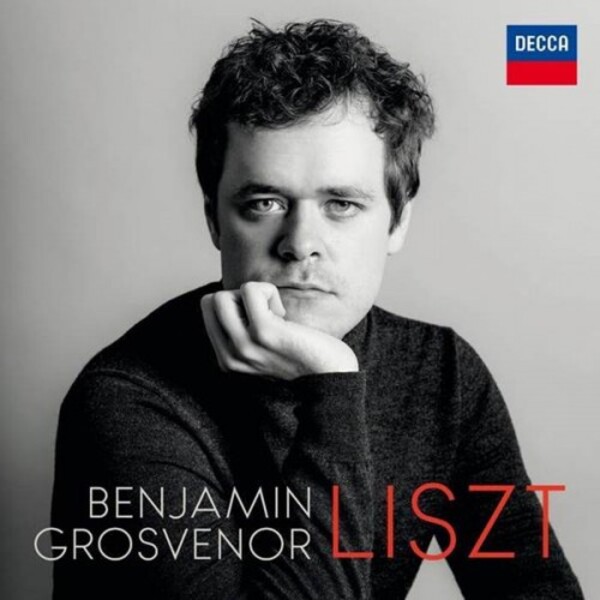 Hot on the heels of his 2020 Diapason dOr and Gramophone Award triumphs, British pianist Benjamin Grosvenor presents his first album in a renewed exclusive partnership with Decca Classics.

The album, Liszt, is released on 19 February 2021, signifying Grosvenors most substantial solo recording to date, centred around the works of the Romantic piano virtuoso and composer, Franz Liszt. The release marks Benjamins sixth album on Decca Classics, following the award-winning Chopin Piano Concertos in 2020.

Grosvenor says, Decca Classics has been my recording home for the last decade, and Im pleased that we are continuing our partnership with this new release. The music of Liszt has been central to my repertoire since I was introduced to it as a child, by my grandfather. I wanted with this recording to show the composer in his different aspects, including some of his original compositions, but also displaying the extraordinarily re-creative abilities he showed in his transcriptions.

Dominic Fyfe, Decca Classics Label Director, adds, I am delighted that Benjamin will start a new chapter with Decca Classics. Decca has been a lifelong home to the legacies of such legendary pianists as Clifford Curzon, Julius Katchen, Vladimir Ashkenazy and more recently Nelson Freire. Benjamin richly deserves his place in such company. He builds on a distinguished discography: both his debut and most recent albums garnered Gramophone awards as well as numerous international honours. His new Liszt recital perfectly captures his compelling pianism and flair for imaginative programming.

The centrepiece to the new album, Liszts Sonata in B minor, is widely regarded as the composers ultimate masterwork and milestone of the Romantic piano repertory. The record also features three remarkable Petrarch Sonnets, among the most beloved of Liszts works, and his dazzling fantasy on Bellinis Norma in which the composer explored virtually all the dramatic capabilities of the instrument in his time. Liszt closes with the charming encore Ave Maria, Liszts popular transcription of Schuberts familiar work.

Winner of the Keyboard Final of the 2004 BBC Young Musician Competition at the age of eleven, Benjamin Grosvenor is now an internationally regarded pianist performing with esteemed conductors and orchestras across the world. A BBC New Generation Artist from 2010-2012, Benjamin has performed at the BBC Proms on a number of occasions and in 2015 starred at the Last Night.

In 2011 Benjamin signed exclusively to Decca Classics, becoming the youngest British musician ever  and the first British pianist in almost 60 years  to sign to the label. His recordings have received numerous awards and in October 2016 he was announced as the inaugural recipient of the Ronny and Lawrence Ackman Classical Piano Prize at the New York Philharmonic. Playing since the age of six, Benjamin graduated from the Royal Academy of Music in 2012 with the Queens Commendation for Excellence.

Grosvenor will perform live from the Barbican on 10 January 2021, performing works by Liszt, Chopin, Ginastera and Ravel. The concert is available to watch online via the Barbican website.

Benjamin Grosvenors 2020 recording of Chopins piano concertos was one of our discs of the year, as well as winning a thoroughly deserved Gramophone award. Now, having recently renewed his exclusive contract with Decca (a welcome sign that they are still a serious label when it comes to the core piano repertoire), he returns with a solo disc of Liszt, and what a knockout it is! Grosvenors account of Venezia e Napoli, the supplement to the second volume of the Années de pèlerinage, was one of the highlights of his 2016 album, Homages. Now he returns with weightier fare, exhibiting yet again a musical maturity far beyond his 28 years of age.

The two main works here are the Sonata in B minor (of which, more anon) and the three Petrarch Sonnets from the second volume of Années de pèlerinage (Italie). Linking them  a transition from the absolute genre of the Sonata to the intensely poetic world of the Sonnets  is an exquisitely poised performance of the D flat major Berceuse in its longer, revised version. In Grosvenors hands this glorious tribute to Chopin, delivered against a hushed backdrop but rising to climaxes of great tenderness and warmth, receives one of its most deeply considered performances on record, every filigree detail lovingly placed. Although the pacing is ardently expansive, the underlying sense of pulse is never lost, and even in a work whose dynamics never exceed an una corda mezzo forte, the dynamic gradations are seemingly infinite. It makes for a perfect curtain-raiser to the delights of the three Sonnets, the first of which (Sonetto 47) has many of the same qualities and is treated to a similarly rapt performance.

The well-known Sonetto 104, with its greater dynamic and expressive gamut, has a noble intensity to it, every line expertly weighted (as when the tenor line speaks, answered by the treble). Grosvenor takes time to savour the detail, with those tell-tale seventh inflections given full weight, but theres no sense of fussiness or micro-management. Here is a performance that recognises the importance of a cantabile line but makes room (temporally, texturally and acoustically) for the huge variety of facets encountered along the way. The close is pure magic, paving the way for the third piece, Sonetto 123, in another spellbinding performance, with a crystalline middle section that takes the breath away.

From Petrarch to Bellini is quite a jump, but Grosvenor presents the opening fanfares of the Reminiscences de Norma with just the right amount of sensitivity to ensure that the jump is not a jolt. This is another performance of huge depth as well as passion, and one that doesnt undersell the tragic drama as transposed to the piano keyboard so brilliantly by Liszt. The chorus Dellaura tua profetica has all the requisite swagger, but it is in the following pages (the heart-melting Deh! Non volerli vittime, the trio Qual cor tradisti, and Normas Padre, tu piangi?) that Grosvenor really proves his mastery of the epic sweep of Lisztian bel canto. The final pages, with their thunderous bass lines, are truly gripping, and one can well imagine how Liszt himself must have brought the house down with this piece. Deccas recording spectacularly captures both the vast dynamic range and every passing inflection along the way.

Yet what raises this recording to real greatness is Grosvenors masterly performance of the opening work, the Sonata in B minor. As hinted already, he has a spacious way with Liszt, and at 32 minutes his account is one of the more expansive on disc (six minutes longer than the mercurial Argerich in her debut DG recording, for example). Yet the way he inhabits every note and really gets into the musics textures ensures that the sense of momentum and drive is never lost: if anything, this is one of the most urgently compelling traversals of this much-recorded work. As in the Petrarch Sonnets, but even more crucially here, it is Grosvenors weighting of the various lines, allied to a tone whose warmth and clarity is never lost even at peak volume, that carries the music inexorably forward.

From the mysterious opening, through the imposing declamatory gestures and the grandioso presentation of the Cross-motif, the first of the works sub-movements never allows the listeners attention to flag. In the more poetic passages, the playing is heart-stoppingly beautiful, the filigree figuration dazzlingly light. Theres a marvellous spiritual stillness to the second movement Andante sostenuto, making the explosive central climax with its rhetorical flourishes (and a rubato that feels just right) all the more imposing. The fugato of the Allegro energico scherzo section has a gleaming transparency about it that would put many Bach pianists to shame, and as the Mephistophelean whirl takes hold Grosvenor plays with an abandon that never actually abandons either the written notes or the musics underlying trajectory. Imagine Sviatoslav Richters legendary, heaven-storming 1965 live performance, but with all the benefits of modern recording and studio conditions: thats how good this is. From grand gesture to prayerful Innigkeit and pointillist proto-Impressionism, this is a performance that seems to have grasped just about every facet of this remarkable score. It closes with an ending whose sense of resignation and spiritual acceptance is impossible to capture in mere words, but perhaps benediction most readily comes to mind. At any rate, it should be clear that Grosvenors performance ranks with the very finest.

Theres a loving performance of Liszts transcription of Schuberts Ave Maria to round off the disc (after the Bellini paraphrase), but most listeners will want this for the Sonata above all else, even though theres also much more to relish in the rest of the programme. Outstanding in every way  what more can one say?

The musicality of Grosvenors leaping chords belies their whiplash accuracy, while the pianist emphasises the octave perorations melodic trajectory as a logical extension from the preceding music, rather than treating this passage as the usual athletic stunt. One may miss Arraus golden-toned largesse or the gaunter classicism of Fleisher, Curzon and Brendel, yet Grosvenors Liszt Sonata clearly belongs in such company.  Jed Distler
Gramophone March 2021