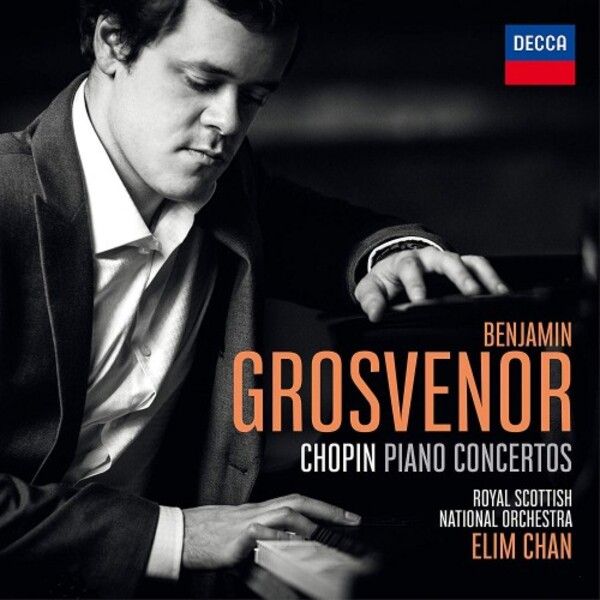 Scorned by many critics but loved by pianists and audiences alike, Chopins two piano concertos have been fortunate on disc, with recordings from Argerich to Zimerman, and including such greats as Rubinstein and Bolet. Even in such exalted company, however, the new recording from young British pianist Benjamin Grosvenor (still only 27 years of age!) can hold its head high. Chopin has been an important feature in Grosvenors repertoire ever since he burst onto the scene over 15 years ago, but this is his first disc solely devoted to the composer, and its clearly the result of a deep-seated love for his music, full of poetry and insight.

One of the problems with these works is that they have been felt wanting when measured against the yardstick of the symphonic concerto as developed by Mozart and Beethoven and taken to its highest peaks by Brahms. Yet this argument entirely misses the point, for these are works in the early 19th-century tradition of the virtuoso concerto as practised by such figures as Kalkbrenner and Hummel, and in this context they stand out as pearls, investing the solo instrument with a natural cantabile character that none had achieved before. Grosvenor understands this as few others do, and every bar is graced with a genuine affection for the music that makes itself felt in the delicate, almost vocal quality to his touch.

Chopins piano concertos, like Beethovens first two in the genre, were published in reverse chronological order, with No.2 actually the first to be composed: its more commanding manner and greater assuredness have tended to overshadow its sister work. Happily, that is not the case here, for the First Concerto receives a performance as engrossing as any on disc. Following the lengthy orchestral introduction (handled with aplomb by the Royal Scottish National Orchestra under the sure-footed direction of Elim Chan), the soloists first entrance gives a taster of whats to come. The initial octave-strewn entrance is arresting, but it is the filigree follow-up, with its exquisitely deployed rubato, that really lifts the listener away. The second subject has a gently rhapsodising feel to it, while the major-key third subject really hits home (at 621) with an inward tenderness that few others can rival. The dreamy second half of the development raises the bar still further in a real transport of delights, the quicksilver figuration endowed with spine-tingling magic while never losing sight of the underlying pulse.

The central Romance is similarly enchanting, emerging in Grosvenors hands (with consistently sensitive support from the RSNO) as one of Chopins happiest creations. The composer himself described this movement as giving the impression of someone looking gently towards a spot that calls to mind a thousand happy memories. It is a kind of reverie in the moonlight on a beautiful spring evening. Those images chime perfectly with Grosvenors reading, which flows with such natural grace and deftly graded dynamics as to silence all criticism.

The gentle high spirits of the Rondo finale, a stylised krakowiak dance, come as the perfect foil to this dreamy reverie, with the recurring twinkle-eyed figuration of the solo part in particular taking one back to the days when these works were staples of the repertoire. By the end, the listener is left in no doubt as to why this Concerto was received with such rapture on its first performances in Warsaw and Paris. If youve ever had any doubts about this work in the past, do listen to Grosvenors performance: its as persuasive an account as there has ever been of the works abundant (but too-often overlooked) charms.

In the better-known Second Concerto, Grosvenor again taps into the rich lyrical vein that is his forte in this music, imbuing the first movement with a deep soulfulness where others lean more towards the high drama of the octave solo entrances. Here again it is the slow movement  an unforgettably limpid Larghetto inspired by Chopins infatuation with the soprano Konstancja Gładkowska  that is the heart of the work, and once more the listeners breath is taken away by the sheer translucency of Grosvenors playing, the famous recitativo passage against tremolo strings endowed with particular mystery, capped only by the final return of the main theme in which soloist and first basson become wondrously entwined. The closing Allegro vivace  a mazurka in all but name  is another of those pieces that oozes a nostalgic charm, and again Grosvenor, Chan and the RSNO capture to perfection the unique combination of folk-tinged high spirits and deft Chopinesque delicacy that makes for a great performance, right down to the last note of the ebullient coda.

The performances are splendidly recorded by the Decca team at the New Auditorium of Glasgows RSNO Centre, and there are fine booklet notes from Jeremy Nicholas. This is a disc that will delight both seasoned collectors and newcomers to these works, and it has one hoping that Grosvenor will make more all-Chopin discs in the near future, for he evidently has a very special rapport with this music.

Whats also abundantly apparent throughout these performances is that the orchestral musicians are galvanised by Chan  not always a given in these concertos. ...  Grosvenor is a master of the sung line, and the way he deals with Chopins phantasmagoric ornamentation has a rare inevitability about it. ... Its the kind of disc that makes you rethink these works and appreciate them all over again. And lets hope that this is the start of a wonderful recording partnership with Elim Chan.  Harriet Smith (Recording of the Month)
Gramophone March 2020