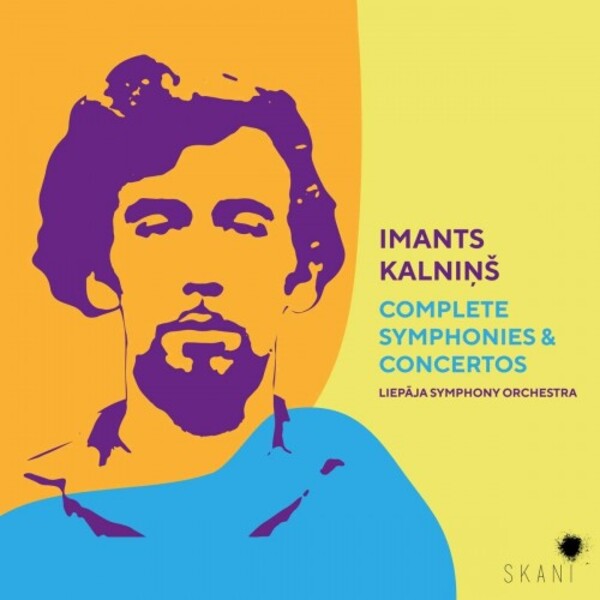 SKANI has previously released recordings of the Symphonies nos. 4, 5, 7 and the Oboe and Cello Concertos in 2014 and 2018. Symphonies nos. 1, 2, 3 and 6 and the Concerto for Orchestra included here are world premiere recordings.

Imants Kalnins entered the Latvian music scene in the 1960s with symphonic ambitions. His first two symphonies, the Cello Concerto and Concerto for Orchestra followed each other in quick succession. Critics praised Kalnins vivid and unique style, referring also to his influences, the greatest of which was perhaps Shostakovich.

The Latvian may have felt close to the Russian composers music and found it understandable; after all, they worked at the same latitude and approximately the same time. However, Kalnins was unsatisfied with the fact that his work resounded only in concert halls and mostly amongst music experts. He wished to address a much wider audience and other groups in society. At the time, he even commented that he would like to live during a revolution and write songs. Kalnins wrote his Symphony no.4 in 1973. It is the most conflicting piece in the composers entire oeuvre, combining both the academic and non-academic spheres into a single genre called a rock symphony.

This combination of genres has remained present in almost all of Kalnins work since the Symphony no.4. Perhaps less or more pronounced, but it exists nonetheless, despite the fact that Kalnins himself often distinguishes his compositions as acad. or non-.

A rock aesthetic and philosophy is a defining characteristic of his musical thought. Taken more broadly, Kalnins music could be deemed a contribution to the counterculture, although surely to the erudite wing thereof.