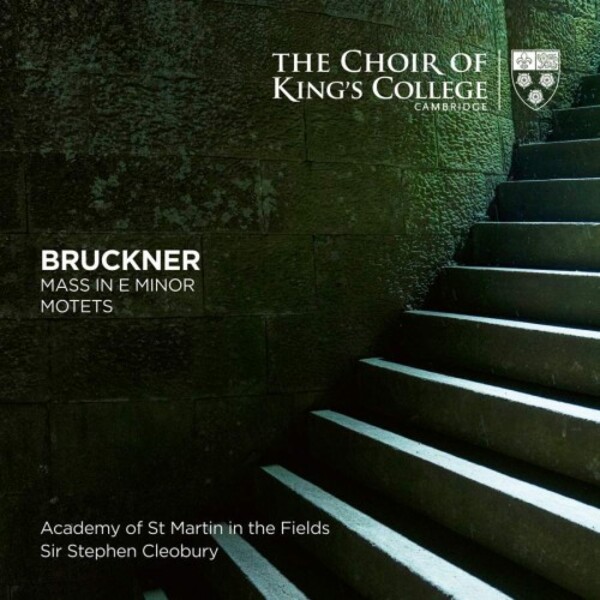 Bruckners E minor Mass and a selection of his profoundly beautiful motets were selected by Sir Stephen Cleobury as his last album at Kings, recorded only a few months before his death. Perhaps the deepest and most spiritual of Bruckners masses, the Mass in E minor is unusual in its scoring for choir, wind and brass. It is recorded here by the Choir of Kings College, Cambridge and the Academy of St Martin in the Fields in Kings College Chapel.

The album is accompanied by a specially-commissioned Appreciation for Sir Stephen, written by Professor Iain Fenlon, as well as Shades of the Past in Bruckners Sacred Music  another commissioned essay on Bruckners works by Dr Martin Ennis.

For many, Bruckners oeuvre is made up of nine fixed stars, the numbered symphonies, orbited by lesser bodies. One could, however, argue that sacred works such as those presented here take us to the heart of Bruckner, man and musician. Many of the pieces were commissioned; most are Gebrauchsmusik, in the sense that they served specific liturgical purposes. However, all reflect the composers deep commitment to his faith. Bruckner planned to dedicate his final, unfinished symphony to his dear God. The same dedication could stand at the head of any of the pieces heard on this album, the final recording of Sir Stephen Cleobury, another faithful servant of the church, whose legacy is a lasting ornament to Kings College, Cambridge.  Dr Martin Ennis

Set down in March and June 2019, this is the last recording made by the late Stephen Cleobury with the Choir of King's College, Cambridge. He retired in September that year after 37 years in post as Music Director at King's, and died in York on 22 November: St Cecilia's Day. In a lengthy appreciation of his career in the accompanying booklet, colleague Iain Fenlon recounts how the final edit of this recording of Bruckner choral works occupied Cleobury in his final days, as well as listening to the whole of Wagner's Ring cycle. It's an example of the catholicity (in the fullest sense) of Cleobury's outlook that he chose, for what he must have known would be his final disc with 'his' choir, repertoire that just a generation earlier was more at home in the rival college of St John's than in the lofty fan vaulting of King's. Yet the marvellous sounds that result are the greatest possible vindication of his choice, for this is a disc that combines the sustained purity of sound and soaring lines for which the King's Choir is renowned with a glimpse into the spiritual realm that could only come from the intensely devout Bruckner's idiosyncratic pen.

The centrepiece here is the Mass no.2 in E minor, originally composed for an open-air ceremony marking the completion of the Votive Chapel at Linz's New Cathedral in 1869, and further revised in 1885 and 1896. Its use of a wind band (woodwind and brass) to accompany the singers testifies to its origins: and it also gave Cleobury the opportunity to make further use of the brass in the disc's opening item, the splendid antiphon Ecce sacerdos magnus, with brass and organ accompaniment, composed in 1885 for the 100th anniversary of the Diocese of Linz. Its striking opening with bare fifths makes a marvellous impression here, and the choir has no problem riding over the instrumental chords. How those trebles soar in the awkward, thoroughly unvocal octave leaps, as if they were the  most natural thing in the world! The contrasts between quiet a cappella passages and full-throttle fortissimos are effortlessly negotiated, swiftly removing any doubts about the suitability of boys' voices in this repertoire: this is surely how Bruckner's choral music must sound in heaven.

That sense of otherworldly wonder continues in the performance of the Mass that follows. Even the restrained, largely unaccompanied opening Kyrie, very much in the mould of the back-to-basics Cecilian movement of the mid-19th century, is imbued with radiance from the King's trebles, with sure support and matchless intonation from the lower voices. The classically-infused Gloria and Credo provide more opportunity to savour the contribution of the wind players from the Academy of St Martin in the Fields, whether in the judiciously-deployed moments of instrumental figuration or the chordal exchanges between wind and voices that hark back to the Venetian polychoral masters. The real wonder here, however, is the chains of falling thirds and descending scales of the Sanctus. With their stratospherically high top notes, these bars are a test of any choir, but here the effect is of pure balm: and the way the brass underpin the choral chords of the closing bars is perfectly balanced by Cleobury. From here onwards, a sense of benediction hovers over the performance, extending to the telling wind solos as well as the choral sound. This is a performance of Bruckner's Mass of a quality and kind you're unlikely to have experienced before - reason enough on its own to hear this disc.

Following the Mass is a selection of some of Bruckner's finest motets, opening with the Marian antiphon Tota pulchra es (1878), with its exchanges between Gregorian-tinted solo tenor (Christopher Nehaul) and full choir, and splendid punctuating organ support. Two graduals follow: Virga Jesse (1885) and example of Bruckner's mature style with characteristic chord progression, and the early, ever-popular Locus iste (1869), its beautiful sense of line and progression exquisitely delineated here without disturbing the overall feeling of spiritual equilibrium. Even earlier is the Marian hymn Ave Maria (1861), which receives another radiant performance with top notes of wondrous clarity.

The disc closes with a heartfelt but expertly balanced performance of one of the quintessential Bruckner motets, the Maundy Thursday gradual Christus factus est (1884). With its allusions to the 'Dresden Amen' and Wagner's Parsifal, it seems to straddle the worlds of the church, sacred opera and Bruckner's own symphonic compositions, and here it receives a performance whose culmination and long, tonally wandering coda are judged to absolute perfection by conductor and performers alike. The whole disc benefits from the expert sound captured in the King's College Chapel by producer Simon Kiln and engineer Arne Akselberg, the acoustics serving as the perfect complement to Bruckner's fabled pauses, echoing chords filling every vault. It must surely have pleased Sir Stephen in his final days; it's certainly a Bruckner disc of rare distinction, and a splendid final tribute to a great musician.

Its refreshing to hear this music sung with the urgent energy of boys voices, the textures almost raw. Their Locus iste soars gloriously in the Kings chapel acoustic.  Fiona Maddocks
The Observer 1 November 2020