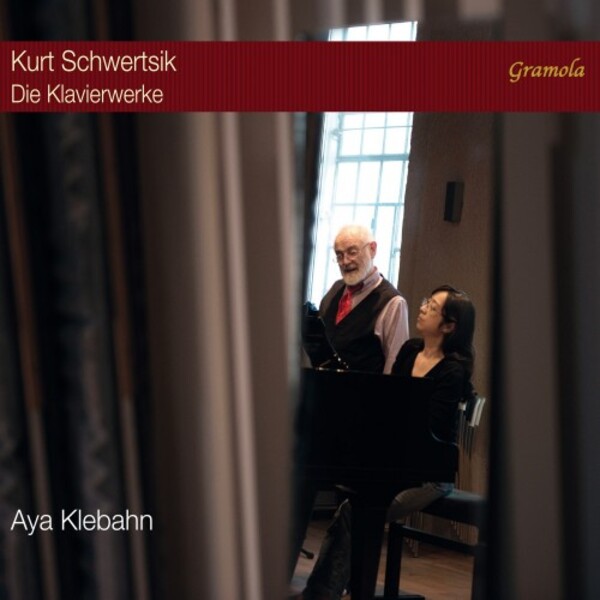 Kurt Schwertsik (b. 1935) studied at the Vienna Academy of Music, where he majored in music composition in the classes of Joseph Marx and Karl Schiske, and later became a pupil of Karlheinz Stockhausen. Being a distinguished expert in all modern compositional techniques, Schwertsik decided early in his career to pursue a new, tonally influenced path. In this aesthetic accessible to a broad audience, he created a diverse oeuvre that extends from opera to Viennese lieder and has made him one of the most popular composers of Austrian contemporary music. With subtle differentiation, the Japanese pianist Aya Klebahn takes up his piano works, composed in a long, interrelated arc stretching over many decades.
Aya Klebahn was born in Tokyo and commenced piano lessons at the age of four. She studied at the Toho-Gakuen University of Music in Tokyo and received her diploma in piano performance and music pedagogy. She moved to Vienna to continue her artistic training under Prof. Leonid Brumberg at the Konservatorium der Stadt Wien.
While a visiting professor at the Henan Conservatory in China, she performed concerts and organized advanced artistic training. Her active concert work has regularly brought her to Japan, where she not only played benefit concerts for children in Fukushima and performed on radio and television, she also gave a special concert in the presence of now-Emperor Hironomiya Naruhito and his wife Masako.
Ms. Klebahn has special affinity for contemporary piano music. She participated in the world premiere of works by composer Luna Alcalay during the Wien Modern festival. However, central to her work is her collaboration with Kurt Schwertsik.