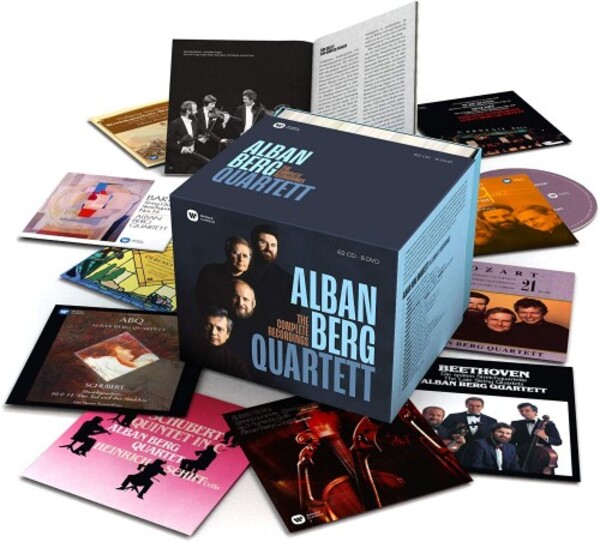 String Quartet no.1 in E minor 'From My Life'

String Quartet no.1 in E minor 'From My Life'

Spanning repertoire from the Classical to the contemporary and some 30 years of the Alban Berg Quartetts career, these recordings evince the achievement of an ensemble whose very name honours both the tradition and innovative musical spirit of its home city, Vienna. Founded in 1970, it soon became recognised as one of the defining quartets of the 20th century and went on to make two landmark recordings of the complete Beethoven cycle, the first in the studio, the second live at Viennas Konzerthaus (presented here in both CD and DVD versions). This 70-disc set, which in addition features DVDs of Schubert and a live performance in St Petersburg, also documents the Alban Berg Quartetts collaborations with such artists as Sabine Meyer, Elisabeth Leonskaja, Alfred Brendel, Rudolf Buchbinder and Philippe Entremont.
2020 marks the 50th anniversary of the Alban Berg Quartett.
Founded in 1970, when it became Viennas first full-time string quartet, the Alban Berg Quartett remained active until 2008. From 1981 it retained the same line-up of players for some 25 years: Günter Pichler, Gerhard Schulz, Thomas Kakuska, Valentin Erben.
The Alban Berg Quartett is one of the defining string quartets of the 20th century. It came to exemplify chamber music and the great Viennese tradition for a whole generation of music lovers.*
The Alban Berg Quartett also played an important role in developing the next generation of string quartets through teaching such distinguished ensembles as the Artemis and Belcea Quartets.
The quartet took its name from the composer Alban Berg (1885-1935), Schoenbergs pupil and one of the leading composers of the Second Viennese School. The name Alban Berg Quartett was chosen both to honour the Viennese musical tradition and to signal the players commitment to 20th-century music. Around 1970, the four founding members of the quartet studied in the USA with the LaSalle Quartet, an ensemble noted for its interpretations of the music of the Second Viennese School.
Unusually for a chamber ensemble, the Alban Berg Quartett were best-selling recording artists. The first of the groups two versions of the complete Beethoven quartets proved especially popular: completed in 1983, by 1991 it had sold over 500,000 copies.
This 70-disc set (62 CDs + 8 DVDs) is the most ambitious and comprehensive ever to be dedicated to a string quartet. It comprises the Alban Berg Quartets entire recorded catalogue  originally recorded for Teldec and EMI between 1974 and 2003 and now on Warner Classics. The discs are presented in their original cover designs.
The set, which covers more than 100 works by 28 composers, ranges from the Classical period to the late 20th century. While there is a particular emphasis on the Austro-German masters (Mozart, Haydn, Beethoven, Schubert, Mendelssohn, Brahms), it includes music by major Czech, Hungarian, Russian and French composers, a number of works by composers contemporary with the Alban Berg Quartett, and even a disc of tango. Beyond the quartet repertoire the set offers quintets and sextets, for which the Alban Berg Quartett is joined by celebrated collaborators.
The centrepieces of the collection are two versions of the complete Beethoven quartets; the first was recorded in the studio between 1978 and 1983 and the second was recorded in 1989 at concerts in Vienna.  Also present in two different versions are Mozarts quartets 14-23, recorded both for Teldec (1975-78) and for EMI (1986-90).
The set includes a first release on CD: the String Quartet no.1 Mobile by the Polish-born composer Roman Haubenstock-Ramati (19191994)
The 8 DVDs contain:
-  The complete Beethoven Quartets, recorded live at the Vienna Konzerthaus in 1989
-  Schuberts Death and the Maiden Quartet, filmed by Bruno Monsaingeon in 1996
-  (As a bonus DVD) A concert filmed in St Petersburg (Mozart, Berg, Brahms) by Unitel in 1991