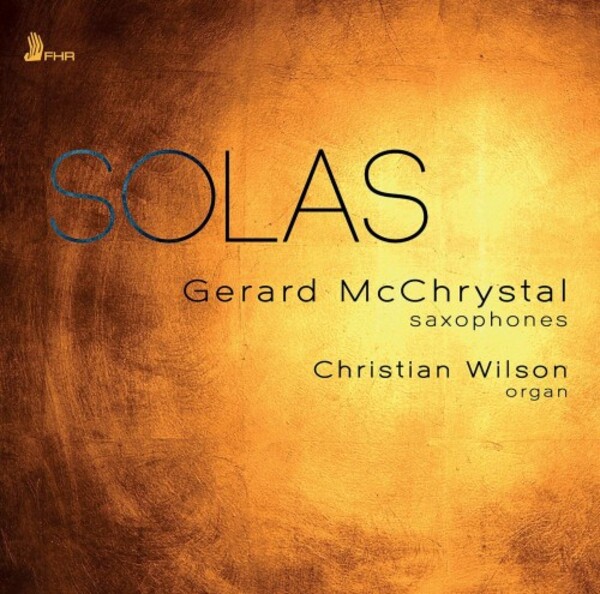 Ode for the Birthday of Queen Anne 'Eternal source of light divine', HWV74

» When I am laid in earth

A Brief Story of Peter Abelard (version for sop. saxophone and organ)

Ode for the Birthday of Queen Anne 'Eternal source of light divine', HWV74

» When I am laid in earth

A Brief Story of Peter Abelard (version for sop. saxophone and organ)

This is Gerard McChrystals second album for First Hand Records which features new arrangements of popular repertoire.
Solas is the Gaelic word for light and features beautful sounds from the soprano and alto saxophones and also the incredible energy of the sopranino saxophone, rarely recorded. Most of the pieces are brand-new arrangements of popular repertoire and give a unique journey from the Baroque to the present day.
Gerard McChrystal was born in Derry, Northen Ireland. He has performed in over 35 countries including China, USA, New Zealand, Korea, South Africa and Azerbaijan. Collaborations include composer Philip Glass, the Soweto String Quartet, Rambert Dance Company, London Musici, the Smith Quartet and classical guitarist Craig Ogden. McChrystal has made 15 albums with orchestras including BBC NOW, Ulster Orchestra and London Musici.
Christian Wilson has forged a unique path as an organist, combining trailblazing virtuosity with serious scholarship and championing rarely-heard or forgotten masterpieces. In addition to his role as Organist at HM Chapels Royal in the Tower of London, Christian is Director of Music at Brasenose College, Oxford, and a lecturer at the university, appearing regularly on BBC radio and occasionally on television as performer or musicologist.
Gerard McChrystals previous FHR album Aria [FHR14] received incredible critical acclaim.
The magnificently sustained tone of the soloist, Gerard McChrystal was a treat  The Independent ****
This is a superb programme... the sheer brilliance of the playing will keep one enthralled... Highly recommended  Fanfare Magazine