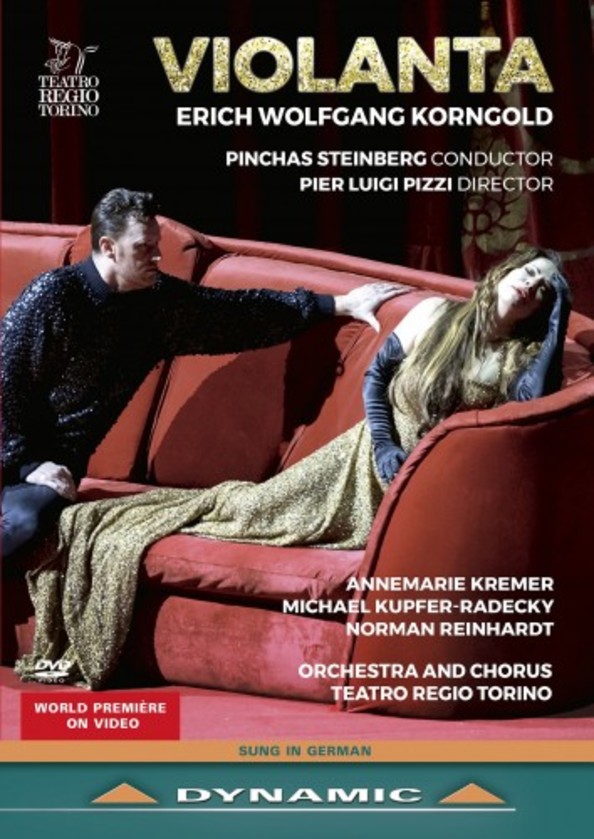 Erich Wolfgang Korngold was a child prodigy whose early genius was recognised and admired by the likes of Gustav Mahler and Giacomo Puccini. His musical style, deeply affected by music for the theatre, possessed great lyrical breadth; he managed to develop his own voice by blending all the different influences he absorbed in Vienna during his studies.
The advent of Nazism in 1934 forced him to seek refuge in the United States, where he became the first composer of film scores, winning two Oscars and marking a milestone in the Hollywood film industry. He became a true inspiration for many composers, including John Williams who went on to achieve fame for his Star Wars scores.
Teatro Regio di Torino has contributed to the rediscovery of this precious one-act opera by staging its Italian premiere. Violanta is Korngolds second opera, which the composer wrote in 1914 at the age of 17.
It was premiered with great success at Munichs Hoftheater on 28 March 1916, and a few days later in Vienna. The influence of the Austrian capital is key to understanding Korngolds style. From the late 1800s to the early 1900s Vienna was a place of contrasts: nostalgia for the past and innovative trends; conservatism and creative energy. In musical terms it was the place where the great classical tradition of the First Viennese School, from Brahms to Mahler, Strauss and Zemlinsky, underwent a gradual transformation until it was shattered by Schoenberg, the epicentre of a radical renewal.
Korngold grew up in this environment, absorbing various influences which are all present in Violanta, making this opera a sort of small-scale Vienna.
The musical setting of the work is one where different styles meet and clash. The work is imbued with German romanticism, but we also hear echoes of the world of operetta, and of the lightness of Strauss. Violantas score has  ashes of Debussy at the same time as Schoenberg and Bartók; it wraps the listener in a gloomy atmosphere before expanding a few measures later into a hugely intense, lyrical phrase. Although Violanta might initially appear as a verismo love drama, some elements actually distance it from this connotation.
Korngolds music, with its highly refined orchestration, perfectly paints the contrast between the dark and deathly atmosphere of the oppressive world which Simone forces upon his wife and the sudden glimpses of life, sensuality and passion brought by Alfonso, making Violanta one of the masterpieces of the early twentieth century.
Driven by a powerful desire to take revenge on the man who had seduced her sister, leading to her suicide, Violanta persuades her husband Simone to become her accomplice and kill him. But after meeting and enticing her victim  Alfonso, the illegitimate son of the King of Naples  her feelings turn into passion, and her heart is overturned. So strong is her love for him now that in order to save Alfonsos life she takes the blow meant for him and dies.
Korngold sets this opera in an imaginary, decadent fifteenth-century Venice, reflecting a fascination for the Renaissance and for the themes of passion and death that were in vogue at the time. Pier Luigi Pizzi, stage director, set and costume designer for this production, chose to set the action at the beginning of the 1920s in a decadent Venice, where distant echoes of a melancholic Carnival add a sense of gloom to the whole performance. Here is how he decided to portray the main characters:
Violanta is an eerie woman; shes moody, delusional and eccentric; a dark lady, vaguely vampiric. This opera is a bourgeois drama about lack of communication. This yearning for a total, absolute life without any rules signifies the failure to lead a normal life, to resign to routine, to accept ones solitude ... Alfonso is a seducer in the style of DAnnunzio, no woman can resist him ... One must look at these characters from a certain distance, with irony, make them live in the literary environment in which they were born ... Simone Trovai is the typical cuckolded husband. Pathetic... I based my direction on a story which I try to strip of all banalities, also its setting, preferring to exploit the dramatic atmosphere created by the music.
Conductor Pinchas Steinberg declared: This music is full of colours, full of emotions; its incredible the scale of emotions and colours and expression that [Korngold] puts in this score, not only for the orchestra but also for the singers, and its a miracle that a 17-year-old boy could write such a thing...
The lyric sound of the soprano Annemarie Kremer is well suited to the title role  and the orchestra likewise revels in the operas eroticism.  The New York Times
The cast for this production was impeccable... Pinchas Steinbergs musical direction was exemplary.  ConcertoNet.com
Cast:
- Violanta: Annemarie Kremer
- Simone Trovai: Michael Kupfer-Radecky
- Alfonso: Norman Reinhardt
- Giovanni Bracca: Peter Sonn
- Bice: Soula Parassidis
- Barbara, Violantas nurse: Anna Maria Chiuri
- Matteo: Joan Folqué
- First Soldier: Cristiano Olivieri
- Second Soldier: Gabriel Alexander Wernick
- First Maid: Eugenia Braynova
- Second Maid: Claudia De Pian
Director, set and costume designer: Pier Luigi Pizzi
Lighting designer: Andrea Anfossi
Video Format / Aspect ratio: NTSC  16:9
Audio Format: PCM 2.0 - Dolby digital 5.1
Region code: 0  All regions
Subtitles: Italian, English, French, German, Japanese, Korean
Notes: Italian, English
Duration: 88 mins.