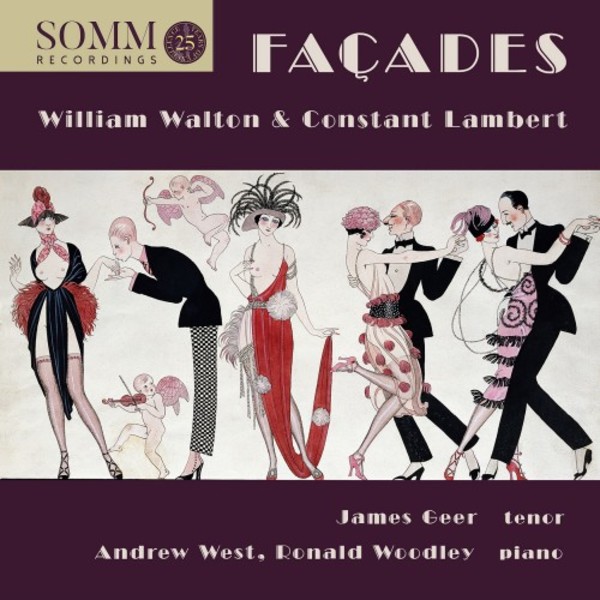 SOMM Recordings explores one of the most significant partnerships in 20th-century British music with Façades, a disc of piano-accompanied songs and music for four-hand piano by William Walton and Constant Lambert. The two shared a friendship of nearly 30 years until Lamberts death in 1951, aged 45.
Façades takes its title from Waltons era-defining entertainment, heard here in arrangements for four-hand piano of its two orchestral Suites by Lambert  regarded by Walton as the definitive reciter of Edith Sitwells nonsense verses.
Lamberts Trois pièces nègres pour les touches blanches for piano duet are a kaleidoscopic, jazz-accented tour de force exploration of the pianos white keys. Described by the composer as an idyll, Waltons Siesta (also for two-player piano) is, says Ronald Woodley in his entertaining and informative booklet notes, infused with the clear light and open charm of Italy.
The eight song settings by Lambert of poems by the eighth-century Chinese poet Li Po are exquisitely crafted, restrained and often enigmatic miniatures [marked by an] elusive and allusive musical style.
Completing the recital, a selection of songs by Walton range from Tudor pastiche (Under the Greenwood Tree) to the atonal-inflected Tritons and lyrically captivating Beatrizs Song.
Making their SOMM debuts are tenor James Geer and his accompanist in the songs, pianist Ronald Woodley. The latter is joined at the keyboard in the four-hand piano arrangements by Andrew West whose previous SOMM recordings include three acclaimed volumes of Parrys English Lyrics (SOMMCD 257, 270 and 272).
SOMM has also released two volumes of Constant Lambert conducting: a compendium of his last recordings including Waltons Façade Suites (SOMMCD023) and ballet music by Tchaikovsky, Meyerbeer and Rossini (SOMMCD080). SOMMs Walton discography includes Sir Adrian Boult conducting the First Symphony and Belshazzars Feast (SOMMCD094).